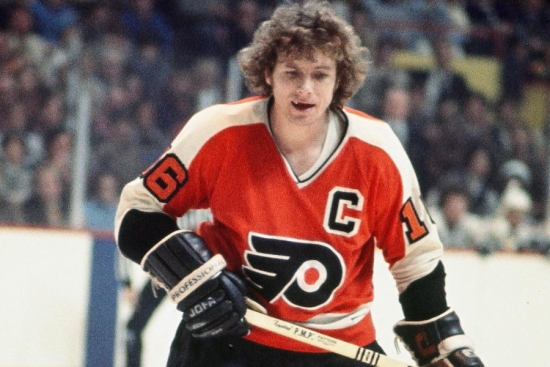 In terms of overall statistics, Bobby Clarke belongs at the top but it is not exactly a landslide.  However in terms of what embodies the Phiadelphia Flyers this wasn’t even close.

When you think of Clarke you envision that grin/smirk that were missing his front teeth.  It was full of mischief and a cockiness that told you that he knew he was good.  At one time, he was in fact the best hockey player in the world.

Clarke would lead the Broad Street Bullies to back-to-back Stanley Cups in 1974 and 1975 marking the first time an expansion team would win the Holy Grail of hockey.  Clarke was not just the team’s top scorer but he was the leader and captain and would mix it up physically as much as the rest of the team.  A gifted playmaker, Clarke was a two time Assists leader and his three Hart Trophies (1973, 1975 & 1976) showed that he was the best in the game for a period of time.  At the time of his retirement, he was 11th all-time in Points and 4th and Assists and he also was chosen for eight All Star Games.

He would later serve as the Flyers General Manager for 19 seasons.

Clarke would enter the Hockey Hall of Fame in 1987, his first year of eligibility.

More in this category: 2. Bernie Parent »