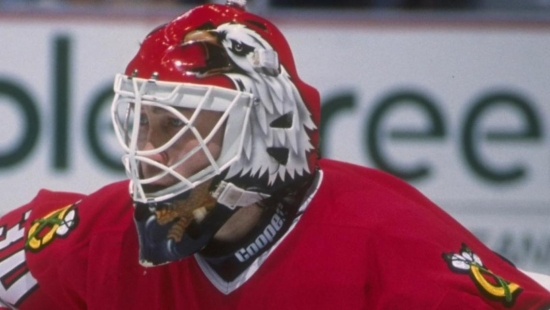 If you asked hockey scouts when they saw Ed Belfour at the age of 18, none of them would have pegged Ed Belfour as a future Hall of Famer.  That may very well have been the case for his next four years.  Belfour went undrafted and he would sign with the University of North Dakota where he took them to a Frozen Four win and in that time he was signed by the Blackhawks, though we doubt that even they knew what was to come.

Belfour would debut in the 1988-89 season and would play for the Canadian National Team the year after though was recalled back in the playoffs where he played good enough to raise some eyebrows,  Belfour won the starting Goaltending job for the 1990-91 season and he dominated throughout the season winning the Vezina, William M. Jennings and the Calder Trophy (since he had not yet eclipsed his rookie limits).  He was also nominated for the Hart Trophy that year.

Belfour would take the Blackhawks to the Stanley Cup Finals the next season and he would duplicate winning the Vezina and William M. Jennings Trophy.  He would continue his streak of “odd” seasons as in the 1994-95 campaign he would win his third post season All Star nod (a Second Place Selection) after receiving two First Team accolades.

Belfour was never known for keeping his opinions to himself and he would be surprisingly traded to the San Jose Sharks midway through the 1996-97 season but it was what he accomplished in Chicago that landed him into immortality into the Hockey Hall of Fame, which he would enter in 2011.