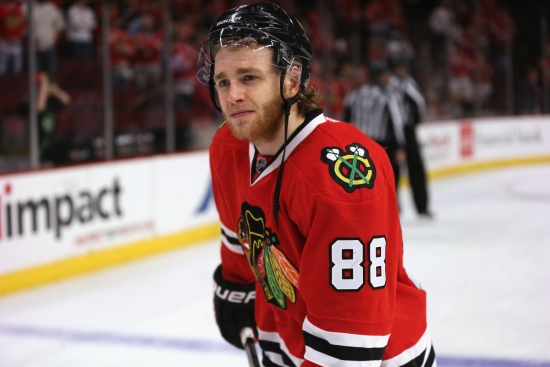 As of this writing, this was really hard for us.

While there should be absolutely no doubt that Patrick Kane should be among the top ten of the Chicago Blackhawks, are we jumping the gun at putting him #3?

Perhaps we are, but we are going to try to justify this anyway.

With all due respect to the era of Mikita, Hull, and Hall, the Patrick Kane-led Chicago Blackhawks would win three Stanley Cups, which were two more than that of the aforementioned triumvirate.  Kane proved his mettle as the 1st overall Draft Pick of 2007 by promptly winning the Calder Trophy.  In his third season, he would obtain his first of multiple First Team All-Star nods bit while he would be injury-plagued over the next few seasons, the native of Buffalo, New York would cement his place in the legacy of the Chicago Blackhawks

The Blackhawks had been steadily improving and in 2010 they would return to the Stanley Cup Finals and win the Holy Grail of Hockey and it was Kane who scored the series-winning goal (in Overtime, no less) to bring the Cup back to Chi-Town.  Kane propelled Chicago back to the Finals in 2013 and while he did not score the Stanley Cup winning Goal he would be named the Conn Smythe Trophy winner that year.  He would lead Chicago to another Stanley Cup win in 2015.

Kane has remained a force in the NHL and he would have his best regular season ever after his third Stanley Cup win with a Hart Trophy, Ted Lindsay Award, an Art Ross Trophy win, and his second First Team All-Star nod.  He would be chosen for another First Team All-NHL squad the year after.  Overall, he is currently a nine-time All-Star, and a five-time post season All-Star, who has averaged over a Point per Game and has well over 1,000 Points.

Still a Chicago Blackhawk as of this writing, Kane has a lot more that he could accomplish for the team and if he is an “iffy #3” at this point he might not be soon.