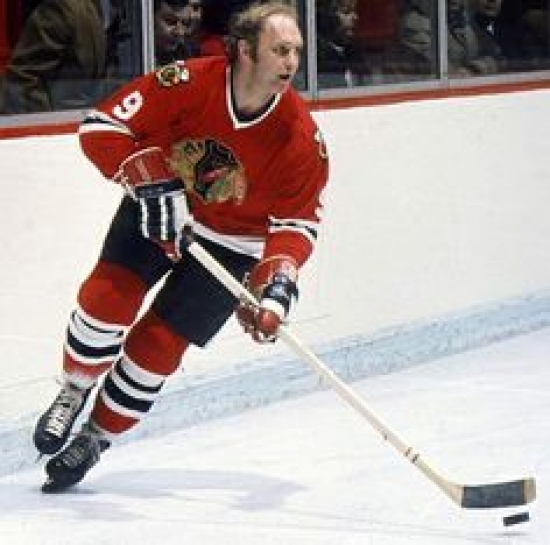 While we made the decision to go with Stan Mikita as the greatest Chicago Blackhawk of all-time, we don’t actually think that he was the most dynamic player and dare we say necessarily the best.

In their respective primes, we would argue that the “Golden Jet” was actually the better player, and certainly the most dynamic, but Mikita’s longevity with the organization would make him more synonymous with the Blackhawks, but Hull was the bigger star.

Hull made an impact in his first season in professional hockey.  The gifted scorer was the runner-up for the Calder in the 1957-58 season and as the 60’s came calling he would win his first batch of individual awards as in the 1959-60 season he was the NHL’s leading goal scorer, the Art Ross Trophy winner and a First Team All Star.  That is a career season for most players but for Bobby Hull it was just the beginning.

After helping Chicago win the 1961 Stanley Cup, Hull went on a tear where he was named to post season All Star Team eleven years in a row (nine First Team and two Second Team).  Excelling at putting the puck in the net, Hull led the NHL in that category seven times and is the franchise all-time leader with 604 and he was the first player to exceed 50 Goals in a Season.  A large part of the story of his success was the curved stick that he and teammate Stan Mikita popularized and as the possessor of one the fastest shots in the NHL (in addition to also being one of the quickest skaters) made him an offensive juggernaut.  The Left Winger would also win the Hart Trophy and the Lady Byng in the 1964-65 season.

Like many star players of the National Hockey League, Hull felt underpaid and he jumped to the upstart World Hockey Association in 1972 when the Winnipeg Jets (who had his rights) shockingly met his asking price of one million dollars.  Hull still had some very good seasons left in him and had he stayed in the National Hockey League there would not have been any doubt that we would have ranked him ahead of Mikita.

Hull would enter the Hockey Hall of Fame in 1983 his first year of eligibility.