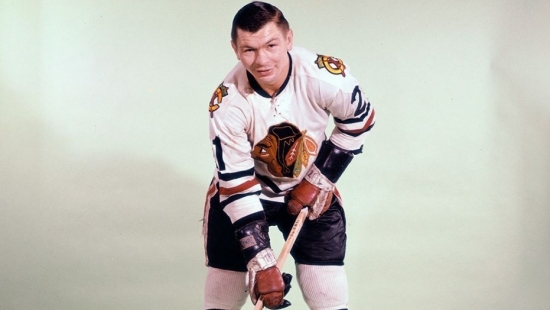 This was not easy.

Do you go with Stan Mikita or Bobby Hull?

Honestly, we don’t think that you can go wrong regardless which way you go, but we went Mikita due to his longevity and his importance to the franchise, though if you think we should have went with Hull we get it.

Now that this is out of the way, lets talk about Stan Mikita.

When you think about the Chicago Blackhawks, the name Stan Mikita is synonymous.  Mikita spent 22 all of his seasons with Chicago including the entire 1960’s and 1970’s.  Early in is career Mikita helped the Blackhawks win the 1961 Stanley Cup but it was after where he and his teammate, Bobby Hull proved that they were among the best in the sport.

After starting his career as roughhousing and highly penalized player, Mikita dedicated himself to becoming a cleaner and more importantly more offensively potent hockey player.  Mikita went on a tear and from the 1961-62 season to the 1967-68 season he was named either a First Team or Second Team All Star (specifically six First Teams and one Second Team) and he was a four time Art Ross Trophy winner.  When he won those last two Art Ross Trophies he also made history by becoming the first to win the Hart Trophy and the Lady Byng, a feat that he accomplished in back to back seasons (1966-67 & 1967-68).

Mikita played 1,396 Games and scored 1,467 Points, both of which are franchise records and are unlikely to be touched anytime soon.  He entered the Hockey Hall of Fame in 1983 on his first year of eligibility.

More in this category: 2. Bobby Hull »