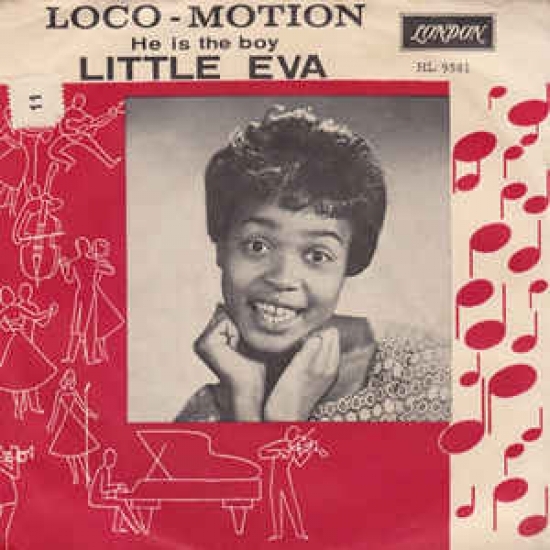 The 60’s dance craze continues, though we have a song where not many people really remember just what the actual dance was.

When you listen to “The Loco-Motion”, the dance in question really isn’t important, as it is just a fun song, with a fun beat and whether or not you actually did a “loco-motion”, just as long as you had fun dancing to it.  That was the easy part of deciphering the song.  The hard part is trying to determine just what the true story of the song’s origin was.

What is known is that Eva Boyd was hired as the nanny for the Gerry Goffin/Carole King couple and that a personal relationship with the two songwriters (who were barely older than Eva who was a teen) led to a number one song.  The common story was that the duo wrote a song for her, based on dance moves they saw her perform around the house while composing music.  King would much later say that they always intended to pen something for Boyd, but whether it was true or not isn’t really relevant.  Frankly, in 1962 it made a much better story to say that it was a former maid/nanny who they wrote for as so I am a little sceptical that the original story is true and that King’s later version is accurate, but at the end of the day, does it really matter?

While other variations of the story say that the song was meant for Dee Dee Sharp and that in the demo, famed producer, Don Kirchner of Dimension Records (the label that King and Goffin wrote for) was happy with Eva’s performance and thus “Little Eva” was born, but that persona or namesake if you will would not have a long lifespan.  Little Eva would have a few more Top Forty hits, though none of which would remain known today and after 1964, she would be largely forgotten and the sad part of the tale would really begin.

King and Goffin would later write a song called “He Hit Me (It Felt Like A Kiss), which was inspired by Eva’s declaration to the song writing pair that her boyfriend physically abused her.  When asked why she tolerated that, her answer was that his actions were motivated by his love.[1]

Good thing they decided to write about it instead of call the police about it isn’t it?[2]

That particular song, even in a pop related slant basically foreshadowed the misery that would befall Little Eva.  She would have a few more hits, but like so many others would be successful for only a limited time.  As Eva didn’t write the material, she never had any ownership to the songs and while her hit song became one of the most known of the early 1960’s (and arguably still is), Little Eva was essentially forgotten.

For a song so big, there is hardly any footage of her singing it and in the mid-70’s, Grand Funk Railroad covered it and a generation attributed the song to them.[3]  In the late 1980’s, Australian starlet, Kylie Minogue did a horrendous cover of the song and as she was a major television star at the time in her native Australia with the television show, Neighbours, she rocketed to the top of the Aussie charts and had the biggest song of the 1980’s in that country.  It would reach number three in the United States and when Eva was asked about it, she simply stated she didn’t care for the new version, but at least for her, it brought attention back to the original recording.

Still for the majority of her adult life, Eva Boyd lived below the poverty line and though most people have heard of “The Loco-Motion”, and more specifically her version, her name remains largely unknown today.  Eva Boyd would pass away in 2003 due to cervical cancer to little press becoming another sad casualty to the game of rock and roll.

[1] The Crystals recorded the song, rather than Eva, which would have made it far worse.

[2] Although it was 1962, and I hate to say this, but it is not like the police would have probably listened anyway.

More in this category: « Breaking Up is Hard To Do Sheila »