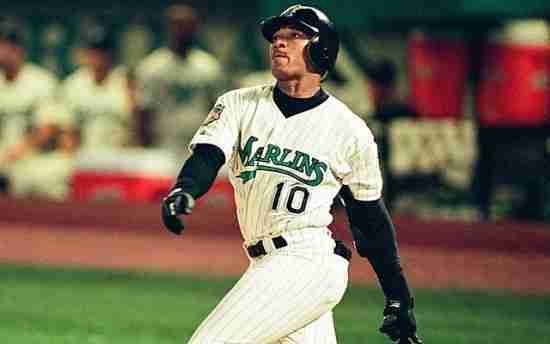 Chairman: The Sheff!  I have to say Spheniscus that I loved watching him as an analyst during the MLB Playoffs.

Tangent time.  I think being an analyst can really help your rep, or inadvertently your HOF chances.  Personally, I am loving listening to Chris Webber on TNT, and retro speaking, I believe it was Phil Rizzuto as a Yankee’s commentator that propelled him to a Hall of Fame induction.

Does this help Gary Sheffield?  Well, it might, as we have a man who stat wise measures up but is tainted with flax oil if you know what I mean.

For me, my biggest issue with Sheffield as a Hall of Famer is that with most of the HOFers you can associate usually with one team or maybe two.  With Gary Sheffield, that isn’t the case.  You know he did a lot, but forget with whom.

Does that hurt him more than a PED association?  It does to me!

Spheniscus: Didn’t we just talk about Schilling? Being an analyst certainly hasn’t helped him. Although you are right about Rizzuto. Johnny Pesky was just as good if not better than Rizzuto, but made the mistake of being a coach for 60 years instead of going into the broadcast booth. Sure he got his number retired, but he’s never getting into the Hall.

But back to Sheffield. I really don’t think you can hold his nomadic existence against him if only because it is only partially his fault. He started in Milwaukee, where he accused them of racism because they played Bill Spiers at shortstop over him, mainly due to his hitting .238 in his first partial season and .247 his second. It’s not like he was riding the bench, he was the everyday third baseman, but Sheffield couldn’t get over the slight.

He was traded to San Diego, where he became one of their five All Stars. Four of whom (Sheffield, McGriff, Tony Fernandez, and Benito Santiago) were traded or not resigned within a season. He was traded to Florida, interestingly for fellow nominee Trevor Hoffman, and won a World Series there. Florida decided to go fire sale and he was traded for fellow nominee Mike Piazza (who spent all of five games in Florida). He wore out his welcome in Los Angeles after three and a half years. Had two seasons in Atlanta and then finally became a free agent for the first time ever, where he ended up in pinstripes before playing out the string in Detroit and the Mets.

So he definitely bounced around. And part of it was his fault. But part was also being on two of the cheapest franchises in baseball history, the early 90s Padres and the any season Marlins. Ultimately, it may hurt him somewhat with the bouncing around. But probably not nearly as much as his PEDs and personality conflicts will.

Chairman:  While yes, whether or not he was traded/bounced around was his fault or not, it does impact his overall identity, which, and again I will use this crutch, affects the “human element”.  It is like Fred McGriff, as Sheffield will probably not make any franchise’s all time accolade (retired number, franchise Hall of Fame).  Maybe this is my own personal bias (OK, it is), but I think that matters to at least a minor degree.

Does Sheffield being in the booth help him?  In his case, no; and not because of the PEDs, which I will get to.  Rizzuto was the Yankees mascot for a long time and over and over subconsciously it entered HOF voters.  Sheffield won’t be a beneficiary of that, and while I like his candor in that capacity, enough sycophants to make a lick of difference do not surround him.

While the hop-a-long existence of Sheffield shouldn’t bother me (though I admit it does somewhat) I can’t help but think that he if he did it all with three teams or less, his voting total would be higher.  Nothing that would put him into Hall of Fame contention mind you (as we both know why), but I could see it raise him a few points.

Spheniscus, how about we create a “Hall of Fame for disgraced athletes turned above average broadcaster/analysts?”  Sheffield could get into that one; though not on the first ballot!

Spheniscus: Before I start, congrats on the new class for the Fictitious Athlete Hall of Fame. Good choices all. Although I was a little surprised just how popular “Slapshot” was this year. Both Reggie Dunlop AND the Hanson Brothers? I figured one or the other, but not both (not that both aren’t Hall of Fame material).

With that said, how much bandwidth do you want the site to take up? Is this our fifth or sixth new Hall of Fame we created in this process? But I’ll play along. Who do you have first ballot? Because all the controversial (Better than disgraced I’d say) former athletes with turned announcers I can think of are terrible by and large. Unless you think Barkley is controversial enough.

But back to Sheffield. Yes, the multiple teams will be a factor. Being a one team player automatically builds your cache for the Hall. And while there were few players who ever swung a bat with more venom, (he looked like a cobra striking when he followed through) the PEDs take that away.

So second year on the ballot how does he do?

Chairman:  Thank you for the congrats on the new class.  We got a plug on TSN (the ESPN of Canada) so as you can imagine there was quite a lot of hockey bias this year from the Great White North!

First ballot is a Fictitious Contributor:  Bob Uecker.  He parlayed a shitty career to a pretty solid broadcasting career.  As he often said, if he ever had one good season it would have messed him up for life.

Darren Pang is fairly good too.

I won’t find any in football.  Dear god somebody take away the microphone from Troy Aikman.  Only he can put me to sleep no matter how exciting a game is.

Spheniscus: Uecker is clearly the first guy who comes to mind, but he isn’t really that controversial (other than his belief that he should have been elected to the Baseball Hall for his playing career). And I guess that Cris Collinsworth became controversial only once he became a broadcaster as every team’s fan base is convinced that he hates their team, which takes true talent. I’d have to think about it more, but any Hall of Fame that gives me more Bob Uecker is something I’m interested in.