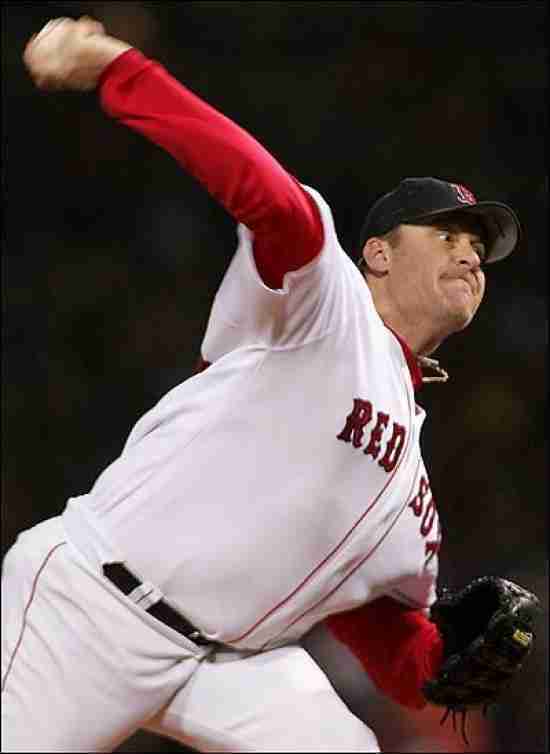 Curt Schilling
27 Dec
2014
Not in Hall of Fame
This is the eighteenth of our series where we here at Notinhalloffame.com, do what else?  Debate the merit of twenty-four men on the most loaded Baseball Hall of Fame ballot in our lifetime.


Joining me, the site's Committee Chairman, in this debate are D.K. of the site's Phillies Archivist blog and Darryl Tahirali of the site's DDT's Pop Flies blog.  This looks to be a very important part of our site, and we hope you will enjoy reading this as much as we enjoyed writing it.

Chairman:  It wasn’t all that long ago when you heard the name Curt Schilling that you thought of the bloody sock and the courageous World Series performance.  Now when I hear Schilling’s name I think of bankruptcy and cancer.  Putting that aside, I wonder if his sad turn of events and a now ten year waiting period could cause Schilling to be collateral damage here.  It is his third year of eligibility and he dropped from 38.8% to 29.2% and with a loaded ballot, perhaps just getting back to the mid 30’s is a win here.

While he may have had an acerbic personality at times, if writers hold grudges against him and withhold their vote for Schilling and turn his case for the Hall of Fame into another Jim Rice-like affair, it’ll be a shame.

Darryl:  DK, I'm not sure what you mean by "another Jim Rice-like affair" unless you're referring to how long it took for Rice to be voted in.  To me, Rice is textbook borderline, and even as a Red Sox fan I would not have been disappointed had he not got in.  However, Curt Schilling is a no-doubt Hall of Fame pitcher, a regular-season workhorse and a postseason giant. (By the way, Chairman, the "bloody sock" was in Game Six of the 2004 ALCS and not the World Series.)  But even back in a 2011 article for this site, I labeled Schilling's Hall of Fame case a "tough sell" because, even though, like Mike Mussina, I think he is absolutely Hall-worthy, he will be overshadowed by bigger names, and that has turned out to be the case—and will be so this year too, unfortunately.

And it was ever thus. Schilling was three times a Cy Young runner-up, bested by teammate Randy Johnson in 2001 and 2002, and by Johan Santana in 2004, even though Schilling led the majors in wins in 2001 and 2004—and not coincidentally Schilling was on World Series winners in both those years, 2001 with the Arizona Diamondbacks, and 2004 with the Red Sox and the "bloody sock" in the ALCS.  Two related peripheral-statistics notes: Schilling's ERA may be 3.46, but his FIP (independent of fielders) is 3.23, meaning he did a lot of heavy lifting himself.  This is borne out by his insanely lopsided strikeouts-to-walks ratio of 4.38—the best of the live-ball era. In plain language, Schilling hated to walk batters and he loved to strike them out. That kept them off the basepaths and unable to score or drive in runs.  What more do you want from your starting pitcher? DK, let's hope the writers are not holding a grudge—Curt Schilling is an elite pitcher with no PEDs taint.  That adds up to a Hall of Famer in my book—and not collateral damage.

Chairman:  Arrghhhhh.   My bad.  Somehow that lazy World Series transferred my memory of the bloody sock from the ALCS to the World Series.  Considering how important that was to the city of Boston, I should have crystal memories of that, but beyond Boston’s gigantic win after decades of futility, it is the World Series to me that caused Drew Barrymore and Jimmy Fallon to reshoot the ending of the lame Fever Pitch and see them show up in the outfield stands.  I stand corrected sir, the Chairman stands embarrassingly corrected.

Personally, I see a man who has every credential the Hall of Fame should stand for, and I am really cheering for him to see a sizable increase in voting percentage this year.  I want more than that mid 30’s win I talked about in my first paragraph.

D.K.:  Early in his career Schilling showed some glimpses of what he could be on some bad Phillies team that finished below .500 eight times out of nine in the years while Curt called The City of Brotherly love” home (1992-2000). To be well above .500 (101-78, .564 winning percentage) with two 300 strikeout seasons for his Phillies days was an indication of a great pitcher in the making, particularly if he got the chance to pitch for good teams who gave him the proper run support.  In his 7 1/2 subsequent seasons with Arizona and Boston  (mid-2000 through 2007) Schilling was an impressive 111-57 and he went 66-21 in his three 20 win seasons of 2001, 2002, and 2004 - Now that’s dominant.  Schilling never lost the ability to fan batters recording almost 200 strikeouts in his next-to-last season and his career total of 3,116 ranks in the top ten of all-time. In a fitting coda to a extraordinary career he went to the mound for the final time and got the win in the final game of 2007 - Game 4 of Boston’s World Series sweep over the Colorado Rockies.

In light of the health and financial problems that have befallen him recently, I’ll be rooting for him to make some real progress this year towards election.

Darryl:  One thing I'd forgotten about until I was reminded recently is that in 2005 Schilling was called to testify before Congress--not because he was suspected of using PEDs but because he was strongly opposed to their use. So, Schilling pulled a Frank Thomas--although that should be the other way around--and both players have obvious Hall of Fame credentials, yet Thomas is first-ballot and Schilling is languishing at Edgar Martinez-Alan Trammell-Lee Smith kinds of percentages.  Maybe D.K. is right: If the writers don't like a player's personality, then that gets reflected in the vote.  I would hope that is not the case, at least to the extent that voters are able to be more objective, but you never know.  I can see that on an overstuffed ballot Schilling may not be an obvious choice, but he should be at the Jeff Bagwell-Craig Biggio level of voting totals.  Frankly, I don't agree with Schilling's politics, but I would not be voting for him for a public office--I would be voting for him for the Baseball Hall of Fame, where he belongs.

Chairman:  I am voting yes and will be cheering for a huge voting percentage increase on January 6.

D.K.:  Hopefully his run-ins with grudge-holding reporters and his outspoken manner when he hosted a Sports Talk Boston radio show won’t penalize him too much.  Besides his 200+ wins and 3,000Ks in the regular season, he was heroic in defeat as a Phillie in the ‘93 world Series and just plain heroic period in the 2001 World Series when he and Randy Johnson practically willed Arizona to victory over the Yankees and in two WS wins for Boston in ‘04 and ‘07  - YES  - (my #7 ranking).
Last modified on Saturday, 03 December 2016 17:20
Tagged under
Tweet