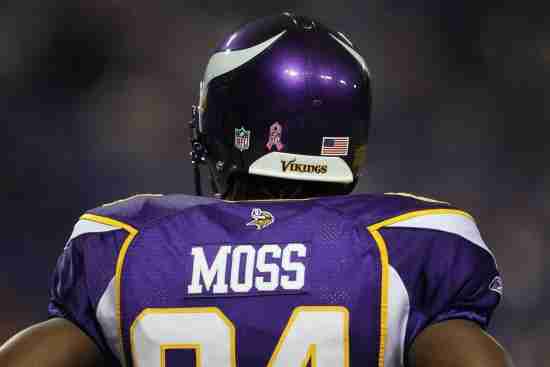 While there are many busts in Canton’s Pro Football Hall of Fame only a select few got there on their first try, and let’s face it; those are the ones we gravitate to the most when we visit the Holy Grail of Professional Football accomplishments.

This includes Terrell Owens, who despite being second all-time in receiving yards has been passed over, likely due to being a divisive presence in numerous NFL locker rooms and his off field shenanigans. The discussion of Owens naturally leads to the newly eligible wide receiver, Randy Moss.

Moss is behind T.O. at third overall in Receiving Yards and like Owens Randy Moss has had his share of poor behavior in and out of the game, though his transition to the media makes him a far more “likable” candidate and one who may leapfrog Owens in the pecking order. Moss is joined by two other strong first ballot candidates, Ray Lewis and Brian Urlacher, both of which should get in, though only Lewis seems like a lock to get suited for a blazer next year.

According to MyTopSportsbooks.com, there are only two sure-fire inductees in the 2018 Pro Football Hall of Fame Class: Ray Lewis and Randy Moss. With Moss and Owens on the ballot, the committee is unlikely to put them both in, which could spell another disappointment for the acerbic T.O.   Urlacher, could find himself following last year’s debut candidate, Brain Dawkins who is now in his second year of eligibility. If Dawkins did not get in on his first try, it should be expected that the former Chicago Bear will have a bit of a wait.

The Semi-Finalists will be announced in approximately one month’s time.
Tagged under
Tweet