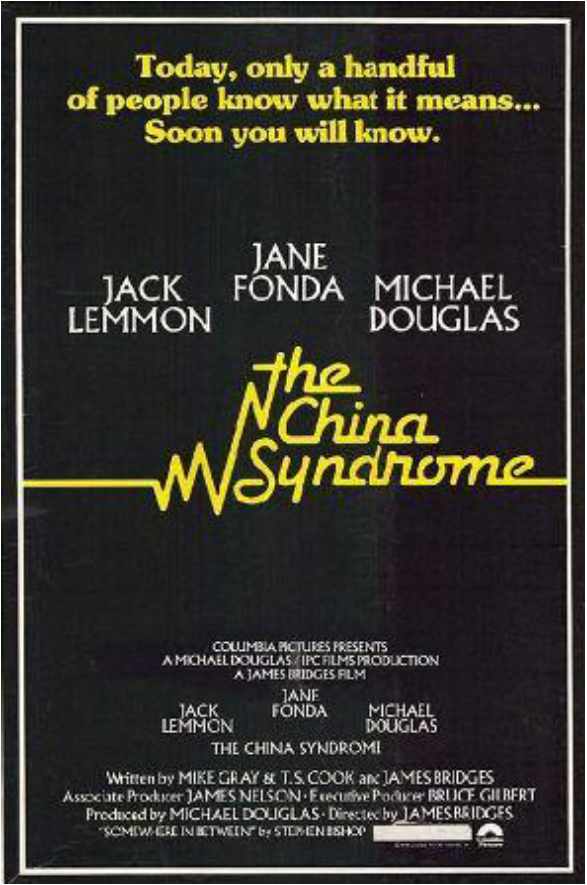 It’s about people, people who lie.
And people faced with the agony of telling the truth.

One of the shows I grew up watching was The Streets of San Francisco, a television police drama which I believe was my earliest exposure to the actor known as Michael Douglas. The show ran from 1972 to 1977, but Douglas left the show to become a first-time producer of the highly-regarded motion picture of ‘75, One Flew Over The Cuckoo’s Nest, for which he won an Academy Award. So Michael Douglas was a television star-turned film producer before he ever became a big-screen actor, which is what happened when he took on his second producing job, The China Syndrome.

Douglas not only produced, but co-starred as Richard Adams, the radical cameraman who called the head of KXLA News a “chickenshit asshole” after learning that the film he secretly shot inside a nuclear power facility during a life-threatening accident, would not be shown on the news and was being put in the vault instead, all in the name of politics. China Syndrome, a term used to describe what may happen during a nuclear disaster: reactor components melting down through containment structures straight through the earth, all the way to China, destroying the world as we know it, is also the title of the film that Douglas calls a monster movie. It’s a film about greed.

Jane Fonda, already known for her political and anti-war activism, had just completed co-producing and starring in the Academy Award-winning film Coming Home, another movie with a political message and a story about a woman’s transformation. But it was the true story of Karen Silkwood, an employee at a nuclear power plant who set out to expose the dangerous lies of the people who ran it (and whose story was later turned into a film starring Meryl Streep) that was the inspiration for Fonda taking on the role of Kimberley Wells, an ambitious reporter of soft news often seen running around in ‘a man’s world’ wearing platform shoes, trying hard to prove her worth.

Fonda saw the opportunity in The China Syndrome for bringing forth not only awareness to the dangers of nuclear power, but for bringing forth women’s issues, particularly women’s issues that arose from working under men in television broadcasting. The sexism shown in scenes between Wells and her KXLA male superior made this writer want to punch somebody in the face. Interestingly, Jane’s character has an Andy Warhol lithograph of Marilyn Monroe hanging in her apartment. Jane Fonda: “A lot of women identify with the tensions that Marilyn Monroe represented between strength, ambition, vulnerability, and malleability. So much pressure was put on women, on their looks, who worked in front of the camera.”

The China Syndrome was a chance for Fonda and Douglas to make a statement about their own personal beliefs. At the time of shooting, the nuclear power industry was making plans to open additional facilities, and the shady political maneuvers that likely went along with that are depicted in this film. Coincidentally, only a few weeks after The China Syndrome was released, 3 Mile Island happened.

Michael Douglas, who has gone on to make more than a couple dozen films since the seventies, is not only an advocate of nuclear disarmament, he’s a supporter of the Nuclear Age Peace Foundation, and sits on the Board of Directors of the Ploughshares Fund, an anti-war grant making foundation. He also holds the title of Messenger of Peace for the United Nations. Jane Fonda has also starred in a large number of movies since this one, released hugely popular exercise videos, and continues to add to her extensive bio of anti-war and political activism activities, while continuing to speak openly on women’s issues and religion.

But ya know, it’s my personal opinion that the real star of The China Syndrome is the late-great Jack Lemmon. Lemmon was chosen to play Jack Godell, the nuclear power plant supervisor, not only for his acting ability, but for his anti-nuclear stance as well. And from the moment he enters the story, Jack Lemmon dominates every frame he’s in. He completely captivates. Lemmon was Best Actor-nominated for his role in The China Syndrome at the 52nd Annual Academy Awards (in the same company with Al Pacino (...And Justice For All), Roy Scheider (All That Jazz), and Peter Sellers (Being There), with the golden statue ultimately being awarded to Dustin Hoffman for Kramer vs Kramer). It is Lemmon’s character that faces the real agony of telling the truth. A deeply caring man who loves his job, Godell puts it all on the line when he discovers that a deeply uncaring and irresponsible man was behind the cover up which caused the accident that Michael Douglas’ character had secretly filmed. But none of Godell’s superiors would listen to him. Money was their only motivation, not safety, and certainly not holding anyone accountable for the lack thereof.

A standing ovation goes out to Wilford Brimley who plays Ted Spindler, Godell’s long-time colleague at the plant who stood up for his friend in the end, with an emotional statement in front of all the media. For you see, when the heads of the nuclear powers-that-be finally succeeded in gaining access to the area of the plant for which Godell, driven to desperate measures had taken control of, shutting them down, they shot him in the back. Their aim was to make the public believe Godell was a delusional gun-toting madman. I’ll never forget Godell rushing toward the camera, stumbling into the plant’s control panel and falling to the floor. It’s one of the most dramatic scenes I’ve ever seen on film, and one I will never forget. Kudos times ten to Jack Lemmon, may he rest in peace.

On the bonus features of the dvd release, Jane Fonda sums up The China Syndrome perfectly: “There was a message being delivered, but it was encased in a story that even if you didn’t buy the message, would hold you. If you feel strongly about something, there’s nothing that can make you feel better than being able to embed your passionate feelings into a delivery system that is totally accessible by people who don’t agree with you.”

The trailer for The China Syndrome...

More in this category: « Filthy Gorgeous: The Bob Guccione Story Remembering: Joe Versus the Volcano »

0 #5 ScRiBeR 2013-09-20 02:37
I agree with the comments-Jac k Lemmon was the most redeeming facet of the entire movie. Just like the character Jack Godell, Lemmon is the only convincing effort. I strain to remember a revealing moment that Fonda contributed to this film (she is quite capable but not here). The same can also be said for Douglas whose best contribution ended when his producing credit was secured. What we have failed to remember is what truly made The China Syndrome a memorable movie was timing. Just weeks after the films release, the name of Three Mile Island was seared into the collective consciousnes s. I think had it not been for that unforgettabl e incident in Pennsylvania in 1979, The China Syndrome would have been close to being a forgettable Hollywood attempt to speak to an important issue concerning us all. As far as political "statement" films of the 70's go - All The President's Men, Being There,The Discreet Charm of the Bourgeoisie. The rest is what's left -unwatched in your Netflix Que.
Quote
0 #4 Live Music Head 2013-05-21 18:24
Yes, I thought he was the more conciliatory as well. In fact, Turner's character was not conciliatory at all, ha! After all, he killed her cat... and by that point, how was she to know it was unintentiona l. In the end, I felt sorry for Douglas' character. He was no match for her.
Quote
0 #3 Darryl Tahirali 2013-05-21 18:13
Boy, Kathleen Turner sure can chew 'em up and spit 'em out, huh? I loved her in Body Heat; poor William Hurt was the schlub there.

It's been ages since I've seen Roses, but I recall it being darker than advertised. I'm also recalling that, during that chandelier-h anger ending, that Douglas was the more conciliatory of the two, which was interesting, but on the other hand, I'm recalling how he embarrassed Turner during her anecdote telling at the dinner party, so all's well that ends terribly, I suppose.
Quote
0 #2 Live Music Head 2013-05-21 01:08
Darryl
Did you enjoy seeing Michael Douglas get his ass kicked by Kathleen Turner in The War of The Roses? What a great film that is... with yet another superb actress and outspoken female political activist.
Quote
+1 #1 Darryl Tahirali 2013-05-20 18:27
Lisa, you nailed it. The China Syndrome was the first movie in which I noticed how effective Jack Lemmon was as an actor. He really is the fulcrum of the film, the true believer who is forced to admit that he has second thoughts about the industry to which he has dedicated his life. His final scenes with Jane Fonda--who is also superb--are still powerful. Yet I am still enthralled by Lemmon right from his opening scene, when the camera pans up to catch his expression as the first turbine trip happens, and he steps out onto the control-room floor to supervise what could have been indeed a China-Syndro me event. His little gestures in those scenes--scoo ping up his coffee cup, closing his eyes in weary anxiety as he nods in response to a question--st ick with me. Then his performance just gets better.

By contrast, The China Syndrome itself is as subtle as a flying mallet--the White Hats and the Black Hats are obvious. It came at the tail-end of the 1970s, when American movies from Network to All the President's Men to Three Days of the Condor were mirroring the popular scrutiny and dissatisfact ion of the post-Vietnam and -Watergate era--open distrust of government and big business.

I still wince at the overweening tactics of the anti-nuclear activists at the public hearing. I also wince at Michael Douglas's scenery-chew ing; he became a fine actor (and, yes, I grew up on The Streets of San Francisco too), but here he tries to build his modest part into something bigger. Thankfully, he isn't the focus of the film; Fonda and Lemmon are, and individually and together they provide the backbone.
Quote
Refresh comments list
RSS feed for comments to this post