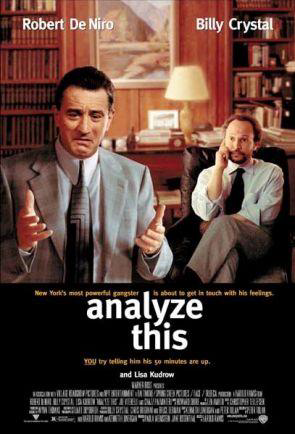 I was having a particularly hard day; an emotional day. One of them hard emotional days that can drive a couple to separate, and stay that way. Fortunately my boyfriend saved us by suggesting a movie rental for chill-out time on the couch. I can’t now remember which one of us chose this movie, but it was the perfect choice. For after hours of analyzing him, me, our life, and the world around us, I then got to see Robert De Niro do the same thing with Billy Crystal, and we laughed our f%#@ing asses off!

Since then, I’ve seen this movie a few times for it’s truly one of the funniest movies ever.

Crystal plays Dr. Ben Sobel, a bored psychiatrist who pretends to listen to the whining of his neurotic New York City clientele while fantasizing about telling them just what he really thinks, who then suddenly finds himself immersed in the excitement of treating a mobster, and asking the question... “What’s my goal here? To make you a happy, well-adjusted gangster?”

De Niro is mob boss Paul Vitti who, from the moment he makes his grand entrance into the psychiatrist’s office, is absolutely brilliant to watch in this comedy directed by Harold Ramis, that same comedian I first got to know from SCTV. Vitti is a Mafia kingpin in crisis, depressed and suffering panic attacks who comes seeking Sobel’s professional help, and despite saying no, absolutely not, Sobel ultimately does help, for mobsters don’t take no for an answer, don’t’cha know? Fear for his life is the main motivation for constantly upsetting his fiancé (Lisa Kudrow), who Sobel leaves at Vitti’s every beckon call day or night, but the challenge of treating a gangster is also irresistible, and utterly and unavoidably hilarious! Vitti develops an immediate fondness for his shrink and in a show of endearment pinches Sobel’s face as an adult would a child. Crystal has been heard to say that he thinks De Niro got a great deal of satisfaction from pinching his face during filming, despite knowing how much it hurt. Ha!

Eventually finding himself in so deep, Sobel reluctantly agrees to cover for Vitti at an important meeting of the families when Vitti is laid up in bed in an uncontrollable fit of weeping. Yes, Vitti is a gangster who cries, and cries a lot. And for the scenes where he was required to do so, DeNiro apparently had a select bit of music that had to be played on set each and every time, in order to get him there. It’s the same music that’s in the insurance commercial that Vitti watches from his bed that makes him cry near the end of the film.

For anyone having a hard emotional day like I was, or any couples at risk of breaking up and needing to laugh about it, or for anyone who simply enjoys well-acted and well-written funny stories on film, this just may be the movie for you. Because when Sobel finally finds the courage and confidence to represent Vitti as his fake consigliere at the meeting of the mafia heads, I’m tellin’ ya, we laughed our f&%#ing asses off!! Billy Crystal is genius; pure comedic genius. I peed my pants.

The trailer for Analyze This...