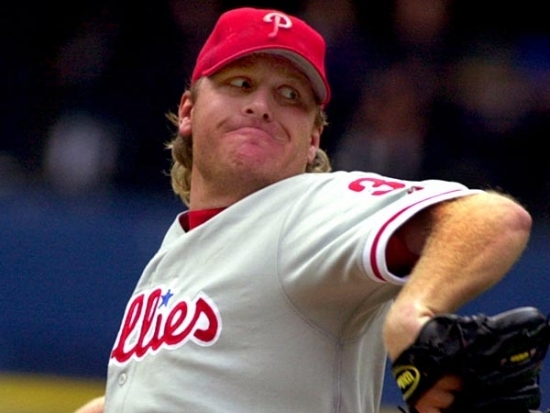 Before Curt Schilling helped take both the Arizona Diamondbacks and the Boston Red Sox to World Series wins, he was a large factor in assisting the Philadelphia Phillies make the 1993 World Series and actually has comparable career numbers with Philly as he does with Arizona and Boston combined.

Schilling broke out the season before in 1992 going 14-11 with a 2.35 ERA and a National League leading 0.996 WHIP.  Despite going 16-7 in ’93 he was significantly statistically worse than the year previous but he was excellent in the playoffs winning the NLCS MVP along with a solid performance in the World Series.

Schilling would be injury plagued over the next three seasons but from 1997 to 1999 he was named an All Star winning 47 Games and a pair of Strikeouts Titles.  He would be traded to the Diamondbacks during the 2000 season after being frustrated with the team’s lack of success.