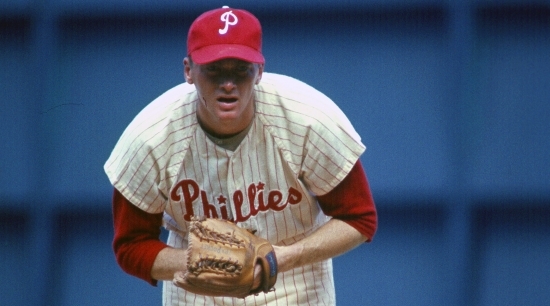 While Jim Bunning played and won significantly more games and was named to more All Star Games (5 to 2) as a Detroit Tiger, he will always be far more known for what he accomplished in Philadelphia.

While Bunning threw a no-hitter in Detroit, hurled a perfect game in Philadelphia.  His best season (1967) took place with the Phils where he was the Cy Young Award runner up.  He actually has a slightly better overall bWAR with Philadelphia then he does with Detroit.  Philadelphia retired his number.  Detroit did not.  Most importantly his hall of fame hat has the letter “P” on it.

I guess we are saying that Jim Bunning is a Philadelphia Phillie!

In terms of traditional numbers Bunning would win 89 Games with 1,197 Strikeouts with Philadelphia over two runs, the first of which was in his prime and the second was the final two years of his career.

Bunning entered the Baseball Hall of Fame through the Veteran’s Committee in 1996 though he never should have to have waited so long to have entered Cooperstown.