SVG says Dwight Howard is a Hall of Famer 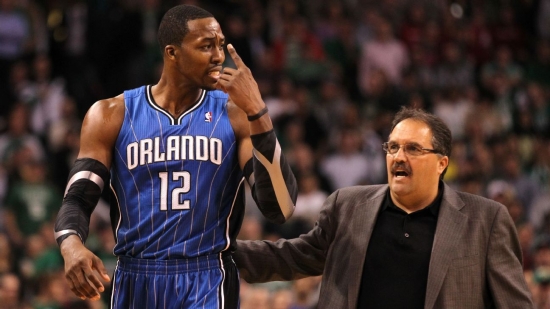 Dwight Howard’s career has not been stellar the last few years and as of this writing he is out with an injury after playing only nine games this year.  The big man’s career is clearly on the downswing so talk about whether he is a Hall of Famer or not are not premature.  One person who definitely thinks that Howard should be chosen is his former coach in Orlando, Stan Van Gundy.

In an interview with the Orlando Sentinel, SVG had this to say:

“Absolutely!  It’s not even close.  It would be a travesty and absolutely ridiculous if he didn’t get in.  He was a First Team All-NBA for five years and Defensive Player three years in a row.  Then compare him to guys like Alonzo Mourning and Dikembe Mutombo.  Come on, Dwight had a lot better career than a lot of centers who are in the Hall of Fame.

Dwight has had injury problems since 2012 when he hurt his back here in Orlando, and everybody is looking at him since then but are forgetting what he was up until them, which is the most dominant big men in the NBA for quite some time.  How many guys do you know who made the All-Star team for eight straight years and are not in the Hall of Fame?  We forget who this guy was.”

The comparison to Mourning and Mutombo are valid and both of them were Hall of Fame locks. Howard is also a five time rebounding champion an eight time All Star and his career is not over.  While he has suffered damage to his on court reputation after clashes with Kobe Bryant and James Harden and an inability to help Atlanta and Charlotte, Van Gundy’s claim that Howard was at one time the best Center in the National Basketball Association for an extended period of time is accurate.

The story of Dwight Howard isn’t over yet, but it is a Hall of Fame one already.

More in this category: « The Honky Tonk Man to the WWE HOF Jason Witten Unretires »