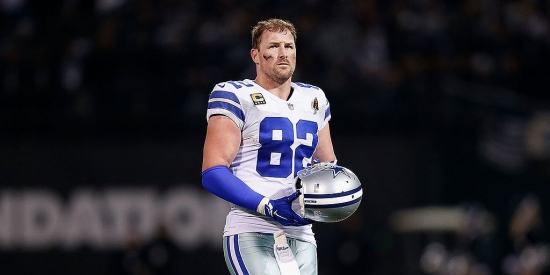 One of the current projects that we are working on is updating our Football Futures, which are the former players who are not yet eligible for the Pro Football Hall of Fame. One of the people we were going to input was former Dallas Cowboys’ Tight End, Jason Witten.  With today’s news, we are not going to do that anymore.

Witten was on Monday Night Football last year and at the time of his retirement he had been chosen for 11 Pro Bowls and collected 1,152 Receptions with 12,448 Yards.  Witten was also a First Team All Pro twice.

He is 37 and is already the all-time leader in Cowboys franchise history in Receptions and Receiving Yards.  In the season he retired (2017) he was named to the Pro Bowl so there is reason to think that he can still produce.

Many (including us) consider Jason Witten to be a future Hall of Fame inductee.  The clock just got set back a little.å

More in this category: « SVG says Dwight Howard is a Hall of Famer Kenny Lofton speaks on the Baseball HOF »