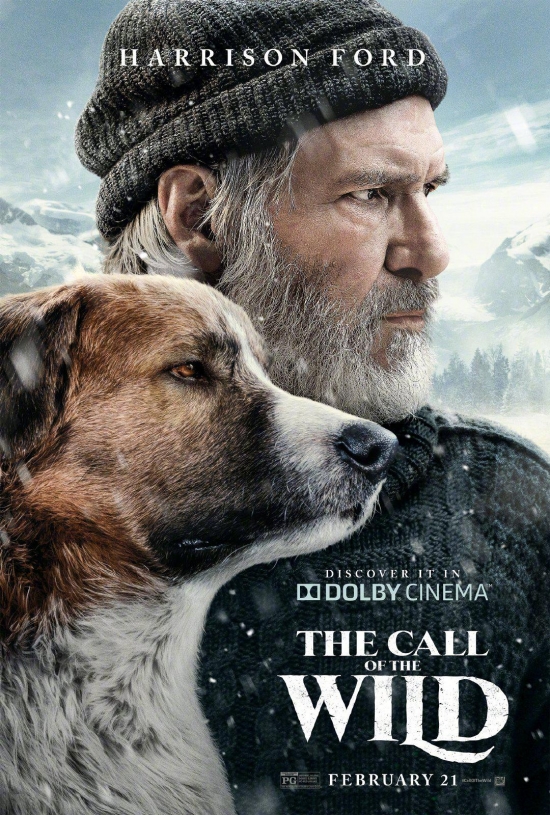 Well, it has been a few weeks since my last review so I figured I better spool up a film and give it a go before my brother (aka “The Chairman”) stops giving me my performance cheques for these blogs. Hey, wait a minute…I haven’t received my first one yet! Anyways, here goes with another review.

For this week we decided to go into another direction completely with respect to film genre’s. With that in mind, we selected “The Call of the Wild” for the evenings entertainment. This latest version stars Harrison Ford, a fantastic actor with an incredible film resume. You would have to be living in a cave for the last 40 years to not know of him and his impact on the film industry. Besides the Indiana Jones series (lets forget the last one…Kingdom of the Crystal skull was complete garbage), and the Star Wars franchise, Ford has been key in several other phenomenal productions; for example, Blade Runner, The Fugitive, Clear and Present Danger, Patriot Games, Air Force One, and K-19: The Widowmaker. Each and every film I have previously mentioned has been iconic and left a lasting impression on all who have watched them. The other co-stars in this film, Sy, Gee and Stevens were known to me, but to a much lesser extent. But, one co-star was really not mentioned in the film’s cast above, and it is that of the CGI talents that created “Buck” the film’s hero.

“The Call of the Wild” was based on the epic novel by Jack London. I remember having to read this book while in school, and have not really thought of it much since. If I am not mistaken, this film has been done at least 6 times, and also has had a few spinoff series as well. For this version, they have changed some of the character’s gender, race and even the tone to make it more inclusive and palatable to the audiences of today and ensure that it would be a true family film. For the few people who do not know what “The Call of the Wild” is about, here goes a quick synopsis.

“The Call of the Wild” is the story of “Buck”, a very large, exuberant, kind and intelligent dog who was dog-napped from his home in California to be taken to Alaska and be sold as a sled dog. While “Buck” is a cross between a Collie and a St Bernard, it actually resembles a Bernese Mountain dog more, but that is just my opinion. Back to the story, due to the Klondike Gold rush, dogs are in great demand to work as sled dogs to take the prospectors to their imaginary fortunes. “Buck” being for all intents and purposes a city dog, had led the life of luxury till then, but finds himself first in a crate, then subsequently a reluctant member of a sled team, to becoming the leader of the pack. However, after his capture and voyage to Alaska, he gets sold a few times, first to an arctic version of the pony express and then he becomes property of some rather stupid, and cowardly greenhorns looking for gold. Abused and left exhausted and near death by the aforementioned idiots, he subsequently finds a true home with Thornton (Ford) who nurses him back to health. Together, the trek northwards where Thornton (Ford) finds himself again, and “Buck” learns to trust his own wilder instincts and make a new home in the North with a pack of Wolves. Even with some instances of abuse to the animals and the demise of some of the characters, the tone of the film is very family friendly and is pretty much suitable for all ages.

What did we like about it? First, the story. While it is a classic tale, which has been told several times, with the advent of current technology, it pretty much allows the film to be told from the dog’s perspective for the first time. “Buck” was the principle character, and in the case of this film, a total CGI fabrication. It did take us a few minutes to adapt to this “dog” version, but after awhile, we could almost think he was real. As the dog was completely CGI, it allowed the director the opportunity to give the dog a greater personality and range of emotions, vice using a live animal and hoping that the dog would cooperate and do what was required of it. The CGI was impressive throughout the film and only added to the film, versus taking away from it, especially when CGI can either be overused or mismanaged. One thing we did find extremely interesting was that in film’s extra segments, there was telling information on how motion capture motion technology was used to assist the CGI creation. Apparently, Buck was a cirque-de-soliel performer who mastered a dog’s gait and movements in such a way that the other co-stars had something live to interact with when filming the scenes. Not like say a MCU film, where I have seen the extra’s and Thor is talking to a tennis ball on a pole to give him a reference. In this aspect I feel that “Call of the Wild” handled some of the CGI aspects in a superior fashion when compared to other films using this technology.

While CGI was integral to the film, it was also used extremely well. The audience felt for the dog, could read it’s emotions and were in tune with “Buck”. Kudo’s to the CGI team who brought a fabled dog to life. With respect to the remaining cast, here is a quick breakdown of their role and contributions:

Harrison Ford as John Thornton: What can I say about Ford that has not already been said before by others. He is a fantastic actor with a substantial resume and even when the film is weak, he still adds to the overall enjoyment. In “Call of the Wild”, as John Thornton, he plays an old man who has lost his way and his family. He is trying to find himself again in the wilds of Alaska and become a better man, so that maybe, just maybe, one day he can go home. He is a kind hearted soul with a love for animals as well as alcohol as was evident throughout the film. He has truly aged well and has taken on the mantle of aged and exceptional thespian quite well, on the high side of 70, closer to 80, he can still manage to carry a film! We really enjoyed his performance in “Call of the Wild” and I truly hope that I can still catch him in a few more films in the future before he finally retires.

Omar Sy as Perrault: I actually enjoyed Sy’s portrayal of Perrault. He came across as a genuine individual who not only cared for his job, but also his charges (sled dogs) and treated them with respect. To emanate these feelings while working with CGI is truly a testament to his skills. His character was integral to the early development of Buck and his transfer from a domesticated pet, to a leader in his pack. This transformation also introduced us to the wilder side of Buck that was buried beneath the surface. Perrault was a truly enjoyable character, even though I had seen Sy in other films/shows, this was the first time that I actually paid attention to his acting skill. I will pay more attention to his future performances.

Cara Gee as Francoise: Once I saw Gee on the screen it only took me a few seconds to recognize her from another favourite show “The Expanse” where she plays the hard as nails Camina Drummer. This role of Francoise was performed with equal skill. I must say that even though the character was changed from a male to a female for this adaption, it still worked, and Gee gave a good performance to support not only her partner “Perrault” but also that of the dog’s. Looking at her resume on IMDB, I see that she is predominately listed in supporting roles, I look forward to see how her talents grow. I do believe that she is someone to watch in the Canadian Film industry and that she will shine more if given the roles and the opportunity.

Dan Stevens as Hal: Stevens played the role of pompous aristocrat or rich guy to a “T”. Mind you he has had plenty of practice in “Downton Abbey” where that is pretty much all what the cast play. Even though a relatively small role, his character was important as it led to the final joining of Thornton and Buck as a team. Stevens emoted the arrogance of aristocracy well, not to mention the entitlement. When it all crashed down on him, the petulance and revenge were equally well displayed, as was really his cowardice. A fine performance by Stevens to go along with some of the others that I have seen in the past.

So, overall, were we entertained? Yes we definitely were. “The Call of the Wild” had all the elements to keep a family entertained on a movie night. The CGI was fantastic, and the few real actors also gave a strong performance to keep us intrigued. The highlight of the film was the aspect in which it was shot, that of the “Buck”, not the humans interacting with him, a pleasant change! Would I recommend it, yes, definitely. Especially if you are looking for a family film that not only the kids will like, but also the parents. Heck, we don’t have kids, and we both enjoyed the film!

If you are interested in further projects with the main stars of “The Call of the Wild” please consider the following recommendations: