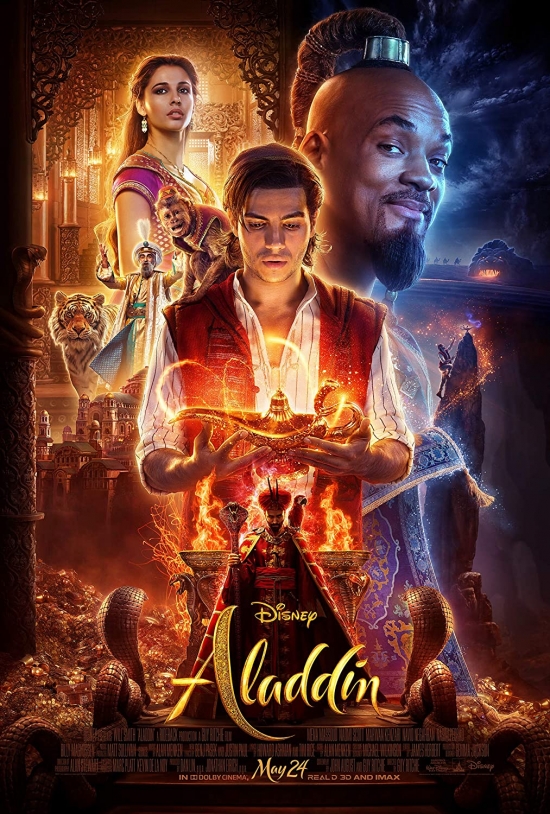 This week’s review is kind of a milestone, I have now been retired for a year, and this is the 50thcontribution to my brother’s website. There are probably a few regular readers of these blogs/reviews, and also some people who will just click on the movie poster as they might be remotely interested. However, I do enjoy writing them as well as watching the shows that are being reviewed.

So, with the 2ndwave of Covid hitting our city, and a quasi lockdown being put into place, my wife and I thought that a light hearted movie might be the trick to alleviate some of the more recent doldrums. With that in mind, I went to the trusty shelf of Blu-Rays and selected Aladdin. This is the latest remake/revision/re-imagining of the story by Disney studios. Now, as we do not have children, and neither of us have seen the previous Disney version of this film, we were going in with a clean frame of mind and not tainted with opinions of the previous effort.  The previous film was animated and starred Robin Williams as the Genie, from what I understand, the original was a fan favourite and thoroughly enjoyed by young and old. This live action version, we have Will Smith acting as the Genie. Williams and Smith are both very talented comedians and actors, but with completely different styles. So, while choosing the film I did expect levity and a half decent nights’ entertainment, but not necessarily something that would be awards worthy.

So the movie was inserted into the player, the wine poured and the popcorn popped, we then started the film. For the 4 people in the world who really don’t know what Aladdin is about, I will provide a quick synopsis. Aladdin is the tale of a poor thief who falls in love with Princess Jasmine. However, behind the scenes, there is a vizier Jafar, who also wants to have the Princess and the kingdom that she represents. However, to do that, he must go into a magical cavern and recover a magic lamp. This lamp, when rubbed will release a Genie who will grant the holder of the lamp 3 wishes. Jafar, needs the lamp so that he can be Sultan, marry the Princess and have everything. However, Aladdin, manages to obtain the lamp, befriend the Genie and win the day, the girl and the Kingdom. This is not much of a plot, and even not taking the magical aspect into consideration, a story that has been told in numerous versions for as long as there was entertainment (Movies, books, plays etc).

This version of Aladdin started off very slowly, as I was not expecting a musical (I know silly me, this is a Disney production), I was disappointed by the opening with the opening. The film started with a small Dhow crossing paths with a galleon and we are introduced to a family that is sailing the Dhow. The Mariner (Smith) talks to his children and then breaks into song. So as this is Will Smith I was expecting a refrain from Fresh Prince “In West Philadelphia born and raised, On the playground was where I spent most of my days…”(now that I have that tune in your head, I will continue), but alas he went on to some tune that introduces the story. This was followed by a very mediocre scene in an Arabian market where we get introduced to Aladdin (Massoud) and Jasmine (Scott). They meet by chance, lie to each other, and start kindling their love. The evil vizier Jafar (Kenzari) is introduced, as well as the doting father, the Sultan (Negahban). So far, the movie does not really have anything going for it, and I almost turned it off. The story was slow at this point, the songs were horrible, and we were just not getting into it. However, we soon find the sinister Jafar (Kenzari) at the magical cave entrance with our hero, Aladdin (Massoud). Aladdin must enter the cave and obtain the magical lamp. As he really has no choice, off he goes and finds the lamp, and this is where the film actually gets better. After rubbing the lamp, the magical Genie arrives (Smith) and the fun begins. With the help of the Genie (Smith), Aladdin becomes a prince so that he can woo Jasmine (Scott), fight Jafar for the kingdom and the hand of the princess and save the day. To help him in this struggle, besides the powerful genie, there is a precocious monkey and a magic carpet that are willing and able to give Aladdin all the aid he requires. So, in a nutshell, this is the film.

What did we like, and what didn’t we like? Hmm, I have read other reviews of this film and was really surprised how wide the spectrum was; it ranged from utter distaste to ethereal enjoyment. However, it appeared that it was people who were fond of the cartoon that disliked this version the most. As I mentioned before, not watching the original first, we found this version to be ok. The CGI was done well, Will Smith was funny and once we got to the point where the Genie appeared in the movie, it was relatively enjoyable from that point onwards. I was actually impressed with Jasmine (Scott’s) singing and had to confirm that it was actually her voice, not lip syncing as we see in other films. But, I cannot say that for Aladdin, his was off tune and hurt our ears. But, he still probably sings better than I can. The scene with Aladdin’s entrance as Prince Ali was very well done and extremely enjoyable. We also enjoyed the Genie (Smith) when he would go off on his tangents. On the negative side…hmm, well the first 20 minutes or so were actually kind of lame, and I desperately wanted to turn it off. Also, Jaffa, the Sultan and Prince Anders were not really well done in my opinion. They were actually kind of cartoonish, but then again, I do realize that this is a Disney production and character development, and intricate plots are not really their forte, they mainly concentrate on good/evil and happily ever after endings. This is really understandable as it is actually a family movie, and films like this are not places for gratuitous sex or violence. To go further into the likes/dislike, lets take a look at the main cast.

Will Smith as the Genie: For the most part, Will Smith movies are very entertaining and we really enjoy them…(except maybe for Bright, that sucked!). He can change tracks from sci-fi, comedy to action hero extremely easily. His flair for comedy is well known and he can take over any scene that he is in and leave others in the dust. In Aladdin, while much of his on screen time is enhanced by CGI/special effects, and the sarcasm that he possesses in abundance shown through. We found him funny, entertaining and interesting throughout the film. Even though the film is called Aladdin, he is and was the true star of the film.

Mena Massoudas Aladdin: As the title character, we found Massoud’s performance to be somewhat lack-lustre. He does not possess the talent of his two principal co-stars and in our opinion was easily upstaged by anyone else in the scene….even the monkey and the flying carpet! Relatively new to the screen, I had only seen him in Jack Ryan before and don’t really remember a lot of details. I hope that he continues to grow and develop his craft.

Naomi Scott as Jasmine: We had first seen Naomi Scott in Terra Nova a few years ago, since then our only opportunity to see her act was in the movie ‘33’. She did not give a stellar performance in Aladdin, but we believe that she has potential and her skill and capabilities will grow in time. While not Oscar worthy if you will, she still did provide some entertaining moments throughout the film. One kudo we will mention is that when she sang, it was actually quite good and we were impressed by her range and capability. Her singing combined with a burgeoning resume will only lead to greater roles in the future.

Marwan Kenzari as Jafar: As the antagonist in Aladdin, Kenzari’s portrayal of Jafar was pretty one dimensional. Yes, this is a movie for the family and a Disney production, but I felt that his role could have been amped up a bit to really show some evilness and treachery. What was displayed on the screen was very predictable and actually at times kind of lame. He really did not stand out in this film and was quickly overshadowed by his parrot and of course the special effects. I thought he provided a far better performance in the Old Guard which I reviewed a few months ago.

Navid Negahban as the Sultan: The Sultan and father to the princess was pretty much a one trick pony in this film. He had to be the doting father, who apparently was not that bright, while still be able to run a small kingdom. There was no surprise or dimension in this character. Unfortunately, he did not get the chance to portray the range or depth of character that he provided in Homeland as well as 12 Strong. I like his style, (just not so much in this movie) and look forward to seeing him in something that he can sink his teeth into in the near future.

Nasim Pedrad as Dalia: Pedrad’s portrayal of Dalia, the princess’s handmaiden was quite funny and entertaining. Her dry wit and sarcasm came out perfectly and balanced Jasmine’s naivety nicely. She had great chemistry with not only Scott (Princess Jasmine) but also with Smith (Genie). Her lines and expressions bounced nicely off of them and helped us enjoy the movie. Of note, I have not really seen her in anything except Saturday Night Live, so I was pleasantly surprised to see her in this supporting role.

So, were we entertained? I would have to say, Yes. This was a standard Disney production that provided a few hours of escapism in a troubled world. Was the movie phenomenal? In that respect, I would have to respond, No, it was not. As I previously mentioned, the first 20 or so minutes kind of sucked, but once Smith came on board the film recovered nicely and managed to provide a few laughs and enhanced the film overall. The CGI was well done and helped move the story along at a reasonable pace. Even though some of the characters were poorly developed or one dimensional, there was still enough substance in the film to provide entertainment for the family. As I previously mentioned, I had not watched the animated version, so I can’t really do a Smith/Williams comparison, and by rights, no one should. Each of the actors have their own unique style and manage to make a character their own, regardless of the film. Also, no one should compare an animated film to a live action film anyways, they are two different beasts and forms of entertainment. But that is just my opinion. So, would I recommend this film, yes. If you are a fan of Disney films and enjoy Will Smith, then by all means cue it up and sit back and watch, and after 20 minutes or so you will start to enjoy the film. If you can’t get over the fact that it is live action instead of animation…then go watch the original.

If you are interested in further programs with the main cast, please consider the following recommendations.