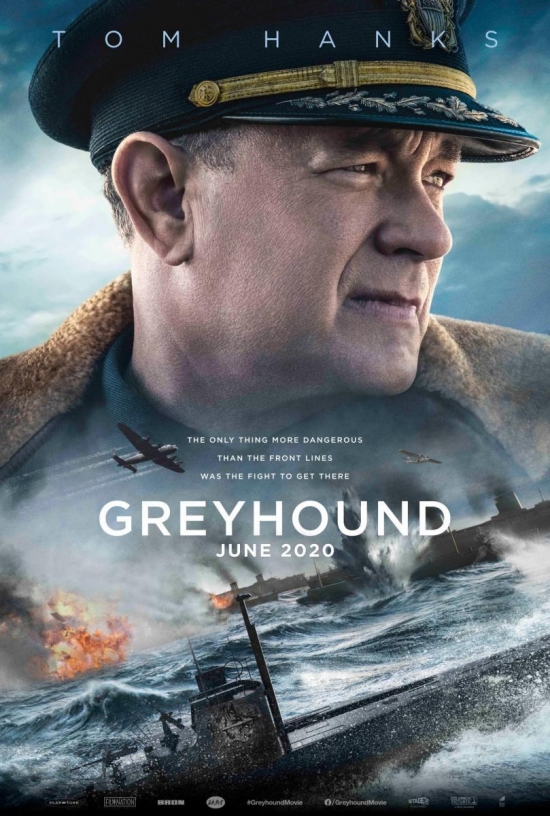 After seeing several reviews on this film and recommendations from numerous friends, we decided to stream the film Greyhound. Usually, for a film like this, I would prefer to buy it as I know this is the genre, actor and exactly the type of film that I will watch numerous times. Mind you, if I purchased it, the time between purchase and initial viewing would be at least a year as it has to work through the stack of unwatched films that I already have.

Greyhound is a film about the North Atlantic resupply convoys of WW2, while not a “true story” if you will, as it is based on a novel “The Good Shepherd” and it has enough composite facts to make it realistic. In this film, one of the most prolific actors of our time, and a personal favourite, Tom Hanks (Captain Krause) is given command of a Destroyer (Call sign Greyhound), other escorts as well as a fleet of merchant ships for his first North Atlantic crossing. Taking place in early 1942, this crossing takes place shortly after the US has entered the war, Captain Krause (Hanks) must make take his command across the Atlantic ocean to bring much needed supplies to England in support of the war effort. Not only do they have to combat the ocean and the elements, they must also battle the fearsome U-Boats that are patrolling the ocean in search of easy prey.

To further complicate matters for Krause (Hanks), there is a portion of the North Atlantic that there is no possibility of air support, this area is the sweet spot for the German Wolf Packs to attack these convoys, as it makes their detection that much more difficult. The tension builds in this film once the convoy enters this zone of no air protection. In short order, a German wolf pack finds the convoy and starts picking off the merchant ships one at a time. For the next few days, the convoy is under constant attack from the U-Boats, while the escort ships continually try to protect their precious charges. This is while the North Atlantic continues to pummel them with rough seas, and cold that is so deep it freezes exposed equipment in short order. Given his baptism of fire, Captain Krause (Hanks) manages to get his fleet across the Atlantic while only losing several of the Merchant ships, but managing to sink 4 U-Boats themselves, which is lauded as an impressive achievement by the Admiralty on his arrival.

In essence this is the story, not really giving out any spoilers here, as the North Atlantic convoys are a historical fact, just as U-Boat operations were during WW2. What this story does is centre primarily on one man and the ship, there are really the only characters developed during the story, and the tale is told from only one viewpoint, that of Captain Krause.

While on the subject of characters, lets look at some of the key ones in “Greyhound”.

Tom Hanks as Captain Krause: As always, Hanks delivers! His portrayal of Captain Krause was incredible. Just as his previous roles in Apollo 13, Saving Private Ryan and Castaway, you felt for the character and could feel his pain and frustration. In this instance, he was not a steely eyed commander who knew everything, he took advice when required from his XO (Executive Officer) or even some of his other junior officers when warranted. He did not know everything, but still managed to function in such a way that you felt he was doing the right thing at all times. He managed to get the nuances of command down, without over dramatizing or “hollywooding” it too much. Another excellent role in a long career.

Elisabeth Shue as Evelyn: This was a real throwaway character from my viewpoint. What was she even doing in the film? As I did not read the book, I do not know the importance of the character to Captain Krause as part of his backstory, but when watching the film, the only thing she gave was a small lead toy ship and slippers. Hell, he could have gotten this from his mother as a farewell gift in a parcel, why even introduce this character? Complete waste of time and also a talented actress’s skills. She has been around for decades and even though some of her film choices were weak, she has been in several key blockbusters over the years, i.e. Back to the Future (2&3), Leaving Las Vegas, mildly entertaining films, i.e. The Saint, Hollow Man, CSI (series) and also some duds….Piranha 3D. So pretty much a wide spectrum, but again her character did not need to be here. Why waste screen time on it?

Stephen Graham as Charlie Cole (XO): Graham is really the only other person given a lot of screen time besides Hanks. As the XO, Cole played an admirable role as the sounding board and second in command. The more films or shows that I watch with Graham, the more I become a fan. He is a talented actor who has been in numerous period pieces and programs, always portraying characters with admirable results. I wish he would have had more time in this film to flesh out his character a bit more, but I realize that the main characters besides Hanks is the ship, the convoy, the Wolf Pack and the Ocean itself.

The last line gave me a great segue to the other characters (real or otherwise). First the ship, USS Keeling, Call – sign “Greyhound”, a Fletcher class destroyer. As a kid I built a model of this Destroyer class, and I remember seeing a few of them in port in Acapulco on holidays in the late 80’s. (These ships were transferred to the Mexican Navy after service with the US forces had come to an end). I was familiar with their stylings and capabilities, both from reading books on Naval history and watching documentaries. This film had a Fletcher class destroyer operating at a time when the first one had not even been commissioned yet, nor in an ocean that they operated in WW2. From what I have read, it was not until the summer of 1942 that the first Fletcher class destroyer became operational, and it was in the Pacific theatre of operations. As with all subsequent Fletcher class destroyers, it was used only in the Pacific against the Japanese, not in the Atlantic against the Germans. Besides these goofs, the ship was really portrayed as a character itself, however, it could have used further amplification. For example, in some of the combat scenes, further action taking place on the guns, engine room or even within the Bridge itself would have increased the tension and action. Having sailed in the North Atlantic myself aboard HMCS Iroquois in the mid 90’s, I am familiar with the rough seas experienced and some of the scenes really brought that NATO exercise back. At times, I think I could even feel the salt air and waves during the film, which I think further enhanced the film experience for me. From what I have read on the film, some of the scenes were also shot aboard HMCS Montreal, this gave the film a further Canadian taste for me.

Additionally, the digitally mastered scenes of “Dickie”, a Flower Class Corvette was a nice and historic touch. A total of 294 Flower Class Corvettes served in the RN and RCN et al during WW2, and these ships were the principal escorts for many of the North Atlantic Convoys. HMCS Sackville (The last Corvette) was used in the film as the model for the digitized “Dickie”. I remember touring that ship when in Halifax, again, it brought back memories when watching the film which added to my general appreciation of the film.

The Merchant ships themselves, were in my opinion, the real unsung character of the film. Everything that was done by the escorts under Captain Krause’s command was done for the sole purpose of protecting these valuable ships. Unarmed, and heavily loaded, these transports were the lifeblood of the Allies during WW2, and without them, the victories in the European theatre would never have occurred. I salute those brave men who sailed them during the war, and unfortunately did not receive the credit that they deserved at the end. It takes a lot of guts to sail to war in an unarmed ship, where your final destination might be the cold waters of the Atlantic, not the friendly shores of England. I would like to see a film dedicated to these men and show from their viewpoint vice that of always the Naval escorts. Who knows, maybe in the future a film from that viewpoint may be made?

The Wolf packs: For all intents and purposes, the target themselves were also a character. The fear that they could exude from the crews were real, as well as the danger that they brought to the convoy themselves. From a special effects perspective, it would have been nice to have some interior shots of the U-Boats or scenes when they were being depth-charged. But I guess if you want to see that, watch Das Boot (A phenomenal submarine movie that everyone should watch, and watch it in original German (w/subtitles) to get the best effect!). The big mistake here is that the German U-Boats would never have used the radio to taunt the Allied ships, for it would have broken Radio silence and made it easier for them to track. A goof, but one that can be accepted to bring up the tension in the film.

So, did we enjoy the film, were we entertained? I was, my wife, not so much. I enjoyed the action, the memories and Hank’s performance in the film. As my wife is not a great a fan of war movies, she found it hard to follow and enjoy. Even though there were some historic inaccuracies, artistic liberties and even un-needed characters, there was still enough of history left to demonstrate the ordeals that the men went through in crossing the North Atlantic. The elements and the U-Boats were continually threatening their existence, and the chances that they would make shore was never guaranteed. Check out the film if you like War movies or are a fan of Hanks, and I am sure that you will be entertained. If you are not a fan, then you may want to give this one a pass.

If you interested in other films from the key cast, please consider the following: