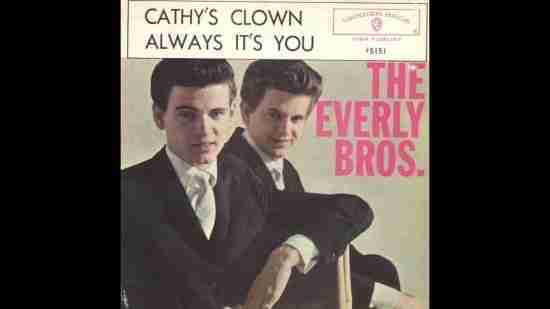 
Elvis and then the Everlys.  It isn’t just alliteration, but it just seems appropriate as both were a couple of years from being replaced, and neither knew it.

The third and final number one hit for the Every Brothers saw them look at the sad side of love…which was actually their forte, something that is not always that apparent as you can easily get distracted by their rich harmonies.

With “Cathy’s Clown”, their first release for Warner Records and their lone number one hit that they wrote themselves.  The song follows the narrator who has been used emotionally and dumped by a woman named Cathy, and there is a sorrow in the harmony that only Don and Phil Everly can pull off with out coming off as mopey, yet while successfully illustrating a man who is in the pit of despair.

Critically and commercially their most successful hit, “Cathy’s Clown” may have been their last number one[1] but it was not their last song to crack the Top Ten as “When Will I Be Loved”, “So Sad”, “Walk Right Back”, “Crying in the Rain” and “That’s Old Fashioned” would reach those levels in the next two years.   Hits would become fewer and far between for the Everlys as the British Invasion took their style of music out of vogue but the critics still loved their output and history has shone a bright light on the brothers from Kentucky who would enter the Rock and Roll Hall of Fame in 1986, an accolade they deserved to obtain early.[2]

[2] While I say critically, this does not include my mom who has told me multiple times how much she couldn’t stand them when she was young.  Good thing she didn’t have a column in Rolling Stone.
Tagged under
Tweet

More in this category: « Stuck on You Everybody's Somebody's Fool »