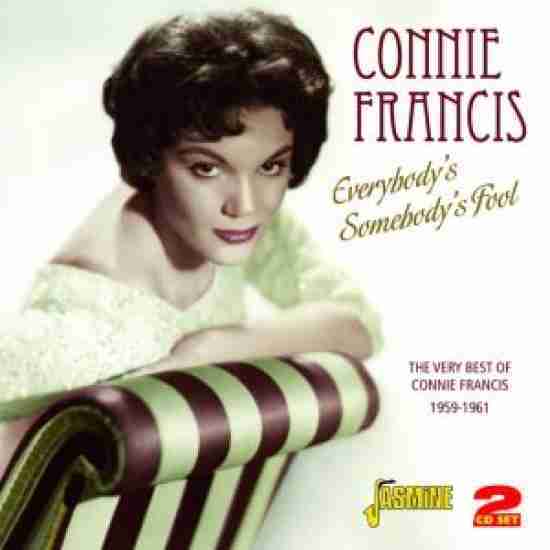 
Every now and then I get an email to my Notinhalloffame.com address or read a comment on the Connie Francis page on the site, it waxes poetic about her vast accomplishments and just how big she was in the late 1950’s and early 1960’s.  Some will say that if wasn’t for her, there wouldn’t have been a Madonna (debatable), or that if Brenda Lee and Dusty Springfield are in the Rock and Roll Hall of Fame than the case could easily be made for Connie (somewhat valid).  Now while I don’t believe that Connie Francis was a necessary domino for us to get to the Material Girl, there are some very interesting parallels, the biggest one being that both Stevens and Madonna could make the accurate claim that at one time they were the biggest female singing star in the world.

The pop music scene in the late 1950’s and early 1960’s may have been dominated by the male gender but the fan base was not gender exclusive.  The young girls who would melt when their teen idols sang still needed a role model who sang on behalf of them, and the pickings were slim in the age of black and white television.  Francis would fill that void.[1]

Born Concetta Franconero, Connie Francis would become one of the many people who have reached the top that was discovered by an Arthur Godfrey talent search only in this case it was because of her prowess with the accordion.[2]  Now dubbed Connie Francis (Godfrey apparently had trouble pronouncing her real name) she would be encouraged to drop the accordion and concentrate on her singing though she was constantly being rejected by record labels.[3]  She was finally signed by MGM because for of all reasons, the son of the label’s president happened to be named Freddy; the name of one of the songs on her demo.

“Freddy” would released by Francis and MGM but maybe it would have been better if he named his son “Craig” or “Dave” because not only was “Freddy” not a hit, neither was anything she released for the next two years.  It came down to her last contracted recording session when she sang “Who’s Sorry Now”, a remake of a 1923 song and another she didn’t think would be a hit as she apparently thanked everyone at the studio on the way out and was ready to go to NYU…or at least that is what she thought would happen.

The very influential Dick Clark, who by then was the host of American Bandstand liked the song and played it to his vast viewers proclaiming that Connie Francis was going to be a star, which is exactly what happened.  “Who’s Sorry Now”, a song she didn’t want to bother with went to number four in the United States, to number one in the United Kingdom and would lead to four more Top Ten Hits in the late 1950’s, marking her as the most bankable female solo singer entering 1960, a year that would bring even more success.

Young girls had someone to look up too and she had this “girl next door” quality that appealed to both genders and a wider age spectrum than many of her peers.  Francis was also nobody’s puppet and when people talk about her popularity they don’t often talk about how she used her intelligence to broaden her appeal.

From an Italian American family, Connie could speak multiple languages and understood the European mentality and the European market and would record some of her hit songs in Italian.  When she was asked to record “Everybody’s Somebody’s Fool” she suggested to add a bit of a German polka feel to it, much to chagrin of everyone around her, but Francis held her ground and with the success she had already brought had earned the right to be heard.

Not only did the German-Americans respond well to the song (as Connie predicted) so did the Germans in Germany, and many other Americans who responded to Francis’ worldly charm and gave her the first number one hit of her career.

I say first, because we aren’t done with her yet.


[1] For years I thought Connie Francis and Connie Stevens were the same person.  I never made that mistake with Connie Chung though.
[2] My brother learned the accordion as a kid.  When the family moved to Rhodesia in 1971 some items were water damaged including that musical instrument.  According to my brother that was one of his happiest moments from the one year he lived in Africa.
[3] Other than Weird Al Yankovic, has anyone ever made the top ten who was an accomplished accordion player?  It’s a rhetorical question, I’m not that curious as to the answer.
Tagged under
Tweet