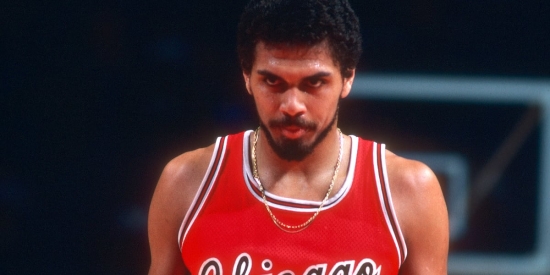 Reggie Theus is arguably the player who put UNLV on the map, as he was the star that took the Runnin' Rebels to their first Final Four.  This put Theus on the national radar, and he was the Ninth Overall Pick, taken by the Chicago Bulls in 1978.

The Guard was a First Team All-Rookie with 16.3 Points per Game, which was followed by a 20.2 PPG.  "Rush Street Reggie" was slightly worse statistically in his third year (18.9 PPG), but he was named an NBA All-Star, representing Chicago in that game.  With similar metrics in his fourth year, Theus had his best season in Professional Basketball right after (1982-83), where he was an All-Star again with career-highs of a 23.8 PPG with a 19.2 PER.

Despite his strong performance, Theus was unable to get the Bulls deep into the playoffs, or even there, as he was only there once with Chicago.  The Bulls traded him to Kansas City for draft picks in 1984.  Theus averaged 18.8 Points per Game as a Bull.