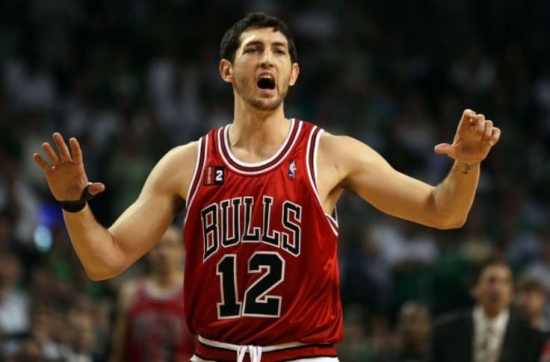 A Third-Team All-American at the University of Kansas, Kirk Hinrich was taken by the Chicago Bulls with the Seventh Overall Pick in the loaded 2003 Class.  Hinrich was never a star NBA player, but his workmanlike skills carved out a long career in the Association.

Hinrich was an All-Rookie player, and the Guard quickly became known for his intensity and immediate leadership. He was never going to be a regular on the highlight reel, but he was going give everything he had, and in his first five seasons, he averaged at least 11 Points and 6 Assists per Game, peaking with a 16.6 year in 2006-07.  In that same campaign, Hinrich was a Second Team All-Defensive Player, and he could have easily earned a couple more as a Bull.

Hinrich was traded to Washington after the 2009-10 season, but he came back when as an Atlanta Hawk, he was traded back to Chicago, where he played three more years before being traded back to Atlanta.  The former Jayhawk averaged 11.4 Points per Game over 748 Games with Chicago.