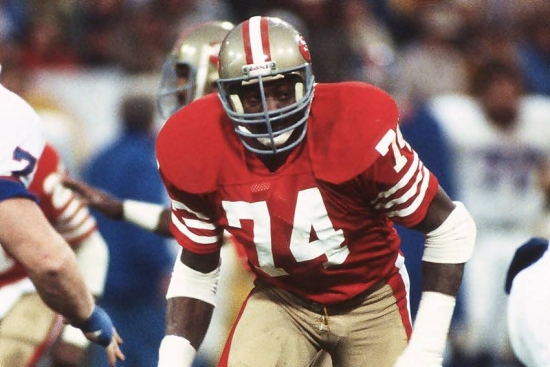 California Football lost a great one today, as former San Diego Charger and San Francisco 49er, Fred Dean, passed away due to complications from COVID-19.  He was 68 years old.

A standout at Louisiana Tech, Dean was a Second Round pick by the Chargers in 1975.  Dean, who played Linebacker at college, was moved to Defensive End by San Diego, where he was an immediate starter.  He went to his first Pro Bowl in 1979, the year after he had 15.5 “unofficial” Sacks.  An elite pass-rusher, Dean was a Pro Bowler again in 1980, this time earning a First Team All-Pro Selection.

In 1981, Dean was openly frustrated with his contact and he was traded early in the season to San Francisco.  It proved to be the final piece in the 49ers puzzle, as he helped take San Francisco to their first Super Bowl win.  He was again a Pro Bowl and First Team All-Pro that year.

Dean had an “official” 17.5 Sack season in 1983, a year that took him to another Pro Bowl.  He played two more years, retiring in 1985 after winning another Super Bowl.

We here at Notinhalloffame.com would like to extend our condolences to the friends, family and fans of Fred Dean.

Kirk Buchner, "The Committee Chairman", is the owner and operator of the site.  Kirk can be contacted at [email protected] . Email This email address is being protected from spambots. You need JavaScript enabled to view it.
More in this category: « Our All-Time Top 50 Dallas Cowboys are now up The University of Nevada announces their 2020 HOF Class »