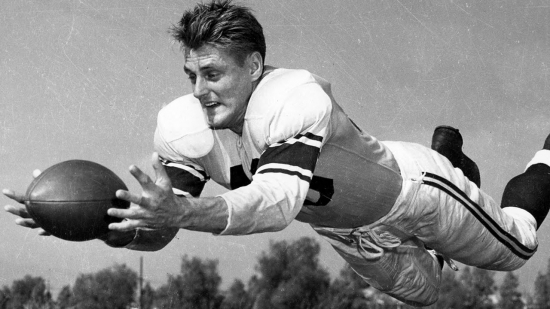 Dubbed "Crazy Legs" for the unique way he ran, Elroy Hirsch is one of the most well-known players of his era.  An exceptional athlete at the University of Michigan, Hirsch served as a Marine (like many did back then) and upon his return from duty, he led a College All-Star team to a 16-0 win over the Los Angeles Rams, who were the defending NFL champions and many reporters stated Hirsch was the star of that game.

Despite being drafted 5th overall by the Rams, Hirsch did not sign with them, and after flirting with going back to school (this time at the University of Wisconsin), he signed with Chicago of the All-America Football Conference.   This is where he would play for three seasons to mixed results, and he was able to secure a release due to a contract breach, and off he went to the Rams.

Hirsch’s first two seasons in Los Angeles were solid, but in his third season (1951) he would explode with 1,495 Receiving Yards, a number that is good today but in 1951 that was nearly 1,000 Yards over his closest competitor.  He had 17 Touchdown Receptions, 10 of which were long yardage. Fundamentally, his season was changing the game of football!  Hirsch's Receiving Yards record (which was only 12 Games) held for 20 years.  He averaged 124.6 Receiving Yards per Game, and as of this writing, only two people have broken that!  Naturally, Hirsch would take the Rams to a Championship that year.

“Crazy Legs” continued to play well (although never to that 1951 level) and he was with the Rams until 1957.  He had secured 6,299 Yards with 53 Touchdowns for Los Angeles over his career.

Hirsch would also perform in many movies in the 1950s and would later become a successful executive for the Rams and then was the Athletic Director for the University of Wisconsin.  He would enter the Pro Football Hall of Fame in 1968, and he was also named to the 100th Anniversary Team.