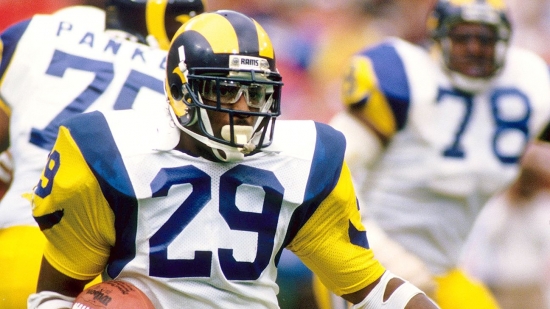 Drafted second overall from SMU in 1983, Eric Dickerson would become the most explosive Running Back in the National Football League.  As a rookie, Dickerson would win the Offensive Rookie of the Year in a season where he led the league in Rushing Yards with 1,808 Yards and 18 Touchdowns, the former being good enough to finish first.  That was good, but in 1984 what he would accomplish would be ten shades of incredible.

Dickerson would become break O.J. Simpson’s rushing record with 2,105 Yards, a record that still stands today.  He would also finish first in Rushing Touchdowns with 14.  With “only” 1,234 Rushing Yards in 1985, Dickerson again had over 1,800 Yards on the ground in 1986.  In his first four seasons in professional football the former SMU Mustang would three times be named a First Team All-Pro, was a Rushing Leader and the top finisher in All-Purpose Yards.  He was also a First Team All-Pro in 1987, but as most of you are aware he was traded in a mega-trade to Indianapolis after having contract disputes with the Rams.

Granted, the tenure of Eric Dickerson in Los Angeles was not long in relative terms but his overall skills while there earned him this high rank.

Dickerson was chosen for the Pro Football Hall of Fame in 1999.