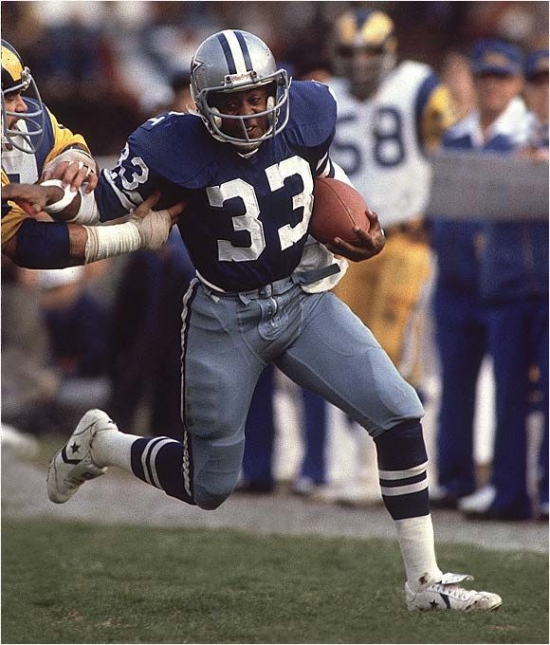 A stud Running Back at the University of Pittsburgh, Tony Dorsett had an immediate impact with the Dallas Cowboys, who drafted him second overall in the 1977 Draft.  That year, Dorsett won the Offensive Rookie of the Year with 1,007 Rushing Yards, and four post-season Touchdowns on route to a Super Bowl win.  Not a bad rookie year!

Dorsett never won another Super Bowl, but he was still a superstar who was one of the elite rushers over the next eight seasons.  He had eight 1,000 Yard years with all of those seasons, seeing him finish in the top nine in that category.  He was a dual-threat in that time with his receiving skills, and was also perennially in the top nine in Yards from Scrimmage, appearing on that list from 1977 to 1985.

After the 1987 season, the Running Back would sign with the Denver Broncos for one final season, and as a Cowboy, he would have 12,036 Rushing Yards, 3,432 Receiving Yards, and 85 Touchdowns.  All of that would be franchise records until the great Emmitt Smith took over those titles.

Dorsett would enter the Pro Football Hall of Fame in 1994, which was his first year of eligibility.  That year, he was also selected for the Cowboys Ring of Honor.