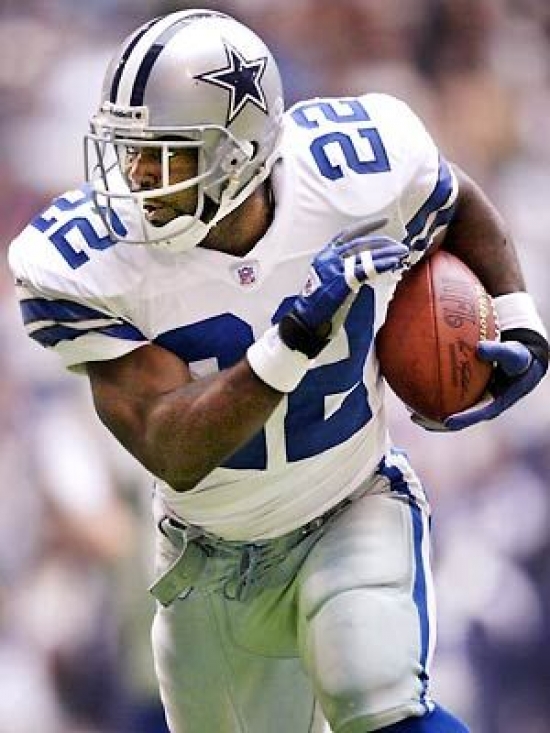 When you look at "America's Team," you have a team that not only had a lot of eyeballs on it but one that would generate a plethora of Hall of Famers.  Choosing the greatest Dallas Cowboy wasn't easy, but in the end, we decided on the player who was statistically speaking is the greatest Running Back of all-time.

Emmitt Smith was a first round pick (17th Overall) in 1991, and the former Florida Gator proved that he Cowboys scouting staff knew what he was doing as some doubted his skills due to his short stature.  Anyone who doubted his abilities was quickly digesting crow as Smith won the Offensive Rookie of the Year.

The next four years were among the most prolific that a Running Back ever had.  Smith won the Rushing Title in 1991 (1,563 Yards), and again in 1992 (1,713).  The ’92 season also saw Smith lead the NFL in Rushing Touchdowns (18), and along with the other two Triplets (Troy Aikman and Michael Irvin) would take Dallas back to the Holy Grail of Football with a Super Bowl win.  This made Smith the first player to win the Rushing Title and the Super Bowl in the same season.

Feeling that he was underpaid, he held out in 1993, and it would take a couple of weeks in the regular season before he suited up for Dallas.  Smith's resolve for more money proved right, as despite playing 14 Games of the 16 Game Regular Season, he won the Rushing Title again (1,486), and for the first time, he led the NFL in Yards from Scrimmage (1,900).  The Cowboys again won the Super Bowl, with Smith winning the Super Bowl MVP.  He made history as the first player to win the Rushing Title, Super Bowl, Super Bowl MVP, and the MVP in the same year.

That may have been his apex, but not his finish.  Smith again led the NFL in Rushing Touchdowns in the next two seasons, and in 1995 win his fourth Rushing Title with what would be a career-high 1,773.  In what was his fourth straight (and final) First Team All-Pro Selection, Smith and the Triplets took Dallas to their third Super Bowl in four years.

Smith went on to play seven more seasons for the Cowboys, with two of those years being Pro Bowl worthy and the first six seeing him hit the 1,000 Yard Rushing mark.

In 2005, Smith was named to the Cowboys Ring of Honor, and he would enter the Pro Football Hall of Fame in 2010, which was his first year of eligibility.

Tagged under
Tweet
More in this category: 2. Bob Lilly »