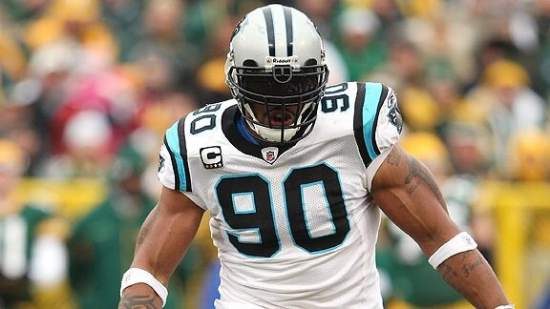 When you think of great defensive players associated with the state of North Carolina you have to think of Julius Peppers.

How can you not?

Peppers was born in North Carolina, played for the University of North Carolina and was drafted by the Carolina Panthers second overall in 2002.  The Panthers expected him to build upon his Chuck Bednarik and Lombardi Award winning season and he did just that winning the NFL Defensive Rookie of the Year Award and essentially rebuilding the Carolina D.  He was now the leader of a defensive corps that would take the Panthers first Super Bowl (a loss to the New England Patriots) and while they would lose Peppers would be named a Pro Bowl Selection five of the next six seasons in Carolina where he would be named a First Team All Pro in two of them (2004 & 2006) and establish himself as one of the game’s premier pass rushers.

Peppers would leave the state of North Carolina in 2010 to sign with the Chicago Bears and he would remain an upper echelon defensive player.  With Chicago, the Defensive End would be a Pro Bowler in his first three years in the Windy City while also being named a First Team All Pro his first year there.  He would later play for the Green Bay Packers where in 2015 he would go to his ninth and final Pro Bowl.  Fittingly he would return the Carolina Panthers for his final two seasons in the National Football League.

Peppers retired with 159.5 Quarterback Sacks, which at the time placed him fourth all-time and he also ended his career ranked second all-time for Forced Fumbles and Tackles for Loss.

Should Julius Peppers be in the Hall of Fame?