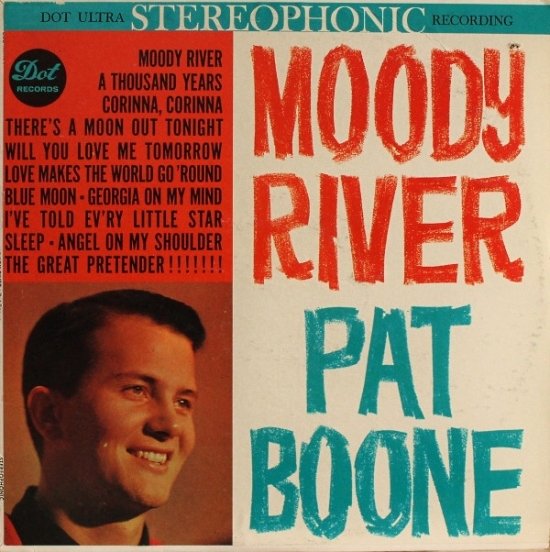 The final number one song of Pat Boone’s career just doesn’t fit his pattern.  It wasn’t a song that was softened from an R&B artist.  It wasn’t happy go lucky, well not lyrically anyway.  It was a confusing song in a way as music was upbeat but the lyrics spoke of a man who went to a river to meet his love that he found had committed suicide.

“Moody River” was originally performed by rockabilly singer, Chase Webster, who while also had a similar arrangement as Boone, delivered a sorrow that Boone either was not capable of, or didn’t even attempt to try (more likely).

Did it matter what Pat Boone sang about?

Forgive me (again) but this is another song where people focused on the melody and completely ignored the lyrics.

Pat Boone would only have one more Top Ten hit in his career, the somewhat offensive song, “Speedy Gonzales” in 1962, but after that year he would never have a Top 40 hit again nor would he have a top 40 Album.  Boone may not have been as commercially successful as he once was, but he never stopped working, maintained a devoted audience and in 1997, found a way to laugh at himself with the deliberately bad album, “In A Metal Mood: No More Mr. Nice Guy”, which were lounge covers of classic heavy metal songs and went #125, the first time he had a charted album in thirty-six years.[1]

While Pat Boone won’t really be mentioned again in great detail in this series, he does have something in common with Rick Nelson who he replaced at number one, and not just that this was his final number one hit; I have to talk about his no talent kid later in this anthology too.

[1] Boone’s cover of “Crazy Train” was used on the Osbourne’s reality show.

More in this category: « Running Scared Quarter to Three »