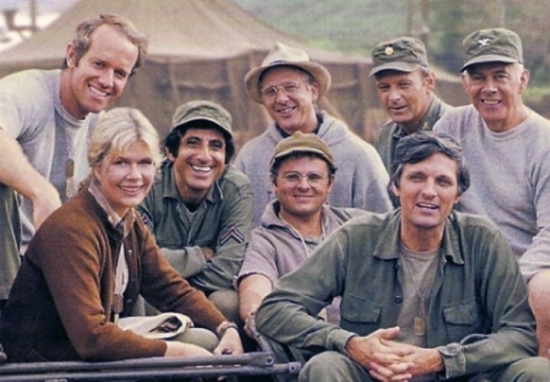 Welcome to a new feature on Notinhalloffame.com, where I, the Committee Chairman, come up with random pop-culture lists of drunken ramblings.

This is the kind of useless tripe that I excel at, though it did nothing to help me with high school English class, nor did it impress any of the ladies, but as a middle-aged married guy, who still consumes alcoholic beverages that rivals anyone on Celebrity Rehab, I can say with full Joe Walsh meaning that "Life's Been Good To Me So Far".

With that all being said, here is the first one, which was created after binge-watching all eleven seasons of M*A*S*H.   I did this with the help of local Barbadian beer and rum. I have ten musings while watching the show that only comes with an increased blood alcohol level.

Before I do that, I am ignoring the most obvious observations, the most glaring of which being that the Korean War lasted two and a half years and M*A*S*H ran for 11 seasons.  Yeah, this led to continuity errors as when they occasionally mentioned dates or actual events both Henry Blake and Sherman Potter would have been the commanding officer for.  Every season, the sitcom had a Christmas episode, and in an early episode where they are looking for a Rabbi, Hawkeye and Trapper refer to (Duke) Forrest, who Hawkeye recalled left two years ago.  Hell, when Potter arrived, they said it was September of 1952, and they did one episode that went from New Year's to New Year's that spanned the entire year of 1951!  If we are to believe the timeline, this is some severe Rick and Morty parallel universe shit that no amount of booze can help me comprehend.

Another obvious one was the recycling of Asian-American actors.  I know that it was a different time, but you can't tell me that there weren't enough of them so that they did not have to regurgitate the same people.  I will grant that watching Mako in anything is good, but he played four different officers over two countries.  It wasn't just him as  an actor named Richard Lee Sung was in eleven various episodes, never playing the same role.

Byron Chung was in seven episodes (again playing seven different roles), and you may have seen him as Jin's dad in Lost.  Soon Tek-Oh, who was the evil Colonel in Missing in Action 2, was in it five times (five different roles).   For what it's worth, he was in four different Magnum P.I. episodes and again never playing the same character.

For those of you under 20, I am referring to the original Magnum P.I. and not this reboot where the lead character has no mustache!

I don't know why I bothered typing that earlier sentence.  Nobody under 20 knows what M*A*S*H is so nobody from that demographic clicked here.

Here are my ten drunken observations of M*A*S*H:

1. Hawkeye treated Radar like shit.Now he treated a lot of people horribly, and most have them deserved it, but without Radar, many of his plans could not have occurred.  Besides that, picking on Radar was low-hanging fruit.  He was also especially condescending, mainly when the company clerk spoke to a patient and tried to help.   Hawkeye would get on his high horse and not so subtly relate to Radar who was the surgeon and who was the Corporal.  I wager that when they reunited in the States (if they did), he still enforced that hierarchy.

Oh, and I know there were times when Hawkeye successfully acted as Radar's older brother/father figure, but often it was because he did something to bring him down in the first place.  Oh, and that final salute that he gave Radar before shipping out does not make up for his overall dickishness.

2. Jamie Farr was 38 years old when he was cast as Corporal Klinger, thus making his 49 when the show ended.Wasn't he way too old from the beginning to play a corpsman? So was Johnny Haymer, who played Supply Sgt. Zale.   He was 53 when he was first cast!  More often than not, the wounded soldiers who were shown as casualties were young, why not the enlisted men behind the lines?  The average age of the 4077th must have been close to 40…especially by the series end in '83.

3. There is not one plotline involving Father Mulcahey that was interesting.He holds the distinction of being my least favorite billed character in one of my top 100 television shows, and yes, I have counted 100.  The only time I got a remote chuckle was in the show's pilot where the priest won a date for two to Tokyo with the appropriately named Lt. Dish. Incidentally, that episode, Mulcahey was played by another actor, and not the mopey looking William Christopher who would adopt the role in all other episodes.

4. M*A*S*H may have had the most annoying laugh track of any sitcom.I don't know this for sure, but I am convinced they recycled the same five "laughs" over and over again

5. "Hot Lips" really hit the wall following the seventh season.No wonder Lt. Colonel Donald Penobscott dumper her expanding mommy ass in the seventh season. I think (not coincidentally) this is also why the nurses would become progressively less hot.

6. Radar's voice was rarely heard on the public address speaker but was the only one shown visually making the announcements.Who was that guy?

8. Now it may seem I hate Hawkeye.I don't detest him at all.  He is the guy that I want to party with in the early episodes of the show. Sanctimonious Hawkeye is a drag, and the latter half of the series saw that happen as often as a Three's Company misunderstanding.

9. How many times did Hawkeye operate while legally drunk? The answer is probably as many times as I wrote a chapter drunk.

10.The most underrated character in all of sitcom history is Charles Emerson Winchester III.He arrived at the perfect time to replace Major Burns who left the show knowing that the persona he created had no redeemable qualities and it could not grow with how the show was progressing.  Winchester fit in perfectly, and David Ogden Stiers correctly earned two consecutive Emmy nominations, though he lost (and I have no problem with this) to Taxi stars.   He lost to Danny DeVito and Christopher Lloyd for their portrayals of Louie DePalma and Reverend Jim Ignatowski respectively.

If (When) I drink more, I am confident I can puke out ten more of these, but this will have to do for now.

Look for more of these soon, as my beer fridge is full.

More in this category: « Step by Step Guide on How to Become A Sports Betting Professional How do the Rams and Patriots look after their first games? »