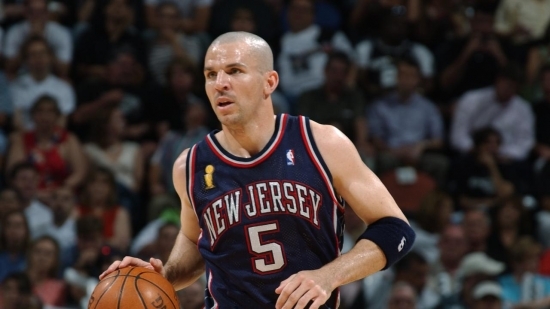 When Jason Kidd was traded from the Phoenix Suns to the New Jersey Nets in a megatrade he was already established as the best Point Guard in the NBA, a mantle he kept in his few seasons with his new team.  Kidd transformed the Nets into a contender as they went from missing the playoffs to going to the NBA Finals.  Kidd missed out on being the MVP (which he probably should have won) but he again was a First Team All-NBA and First Team All-Defensive Selection.  Nobody in the history of the franchise ever turned around the team like Jason Kidd did.

While the 2001/02 season was arguably his best in the NBA Kidd kept the Nets relevant for the next few years and he was a Second Team All-NBA and First Team All-NBA Selection the next two years while always being named to the All-Defensive squads.  Kidd would again take the Nets to the Finals in 2003 and would keep them in the Eastern Conference title picture.  As a Net, Kidd finished in the top five in Assists, which is hardly a surprise considering that he is (as of this writing)) second all time.  He also would lead the NBA in Steals in 2002.  His overall numbers with New Jersey would see him score 14.9 Points and 1.9 Steals per Game with an impressive 5.9 Rebounds per Game, an excellent number for a Point Guard.  Not surprisingly, his 9.1 Assists per Game was the highest number in the NBA during his tenure as a Net.

He would later be traded to Dallas where he would help provide the necessary leadership to win the NBA Championship in 2011.

Jason Kidd would enter the Basketball Hall of Fame in 2018 in his first year of eligibility.

Kidd may not be the player with the most Points or Games Played in franchise history but he is definitely the player who provided the most impact.

More in this category: 2. Julius Erving »