Baseball
Add new comment
Generally, the mold of the Relief Pitcher is a blazing fastball and a powerful delivery.  Dan Quisenberry did not fit that mold…or any other one for that matter.
Read more

Baseball
Add new comment
In this era of the overpriced, overpampered, selfish athlete, we can’t help but like a player who was nicknamed “Mr. Team”.  This isn’t to say that Bob Elliott did not still rack up some impressive individual accolades as he certainly did just that.
Read more

Baseball
Comments (1)
Sadly, like our Notinhalloffame entry for Whitesnake brings about thoughts of Tawny Kitaen; our Chuck Finley Baseball entry conjures up the same image; although this image is not her straddling a sports car, but hitting a Pitcher over the head with a stiletto.
Read more

Baseball
Add new comment
While Jason Giambi is better known for being an inflated PED user, the fact remains that he was a very good hitter who was a former American League MVP.  Giambi would go to five consecutive All-Star Games, blasted 440 Home Runs with a .516 career Slugging Percentage over a twenty-year career.  He would also show solid plate discipline with three On Base Percentage Titles and retired with a very good 50.4 bWAR.
Read more

Buy your Tickets to see Exhibition: Nationals Homecoming Game at Nationals Park in Washington, DC HERE for as little as $20!

Buy your Tickets to see New York Yankees at Baltimore Orioles - Opening Day at Oriole Park at Camden Yards in Baltimore, MD HERE for as little as $95!

Buy your Tickets to see New York Yankees at Baltimore Orioles at Oriole Park at Camden Yards in Baltimore, MD HERE for as little as $33!

Buy your Tickets to see New York Yankees at Baltimore Orioles at Oriole Park at Camden Yards in Baltimore, MD HERE for as little as $43!

Baseball
Comments (4)
Another very interesting name eligible for the 2014 Baseball Hall of Fame vote is Luis Gonzalez. “Gonzo” has very good career numbers, with 2,591 Hits, 354 Home Runs and 1,439 RBI’s. His 48.0 career WAR is nothing to sneeze at either. The question that arises with Gonzalez is the major spike in his power numbers in his 30’s and that he had his best seasons in his second decade in the Majors. Although his name has never been associated with PEDs, he is often lumped in that category. As it stands, Gonzalez is probably a bubble candidate before the alleged…
Read more 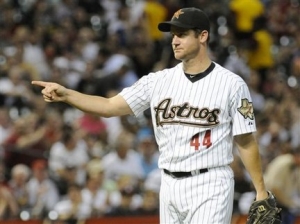 Baseball
Comments (1)
In the mid-2000’s, Roy Oswalt was considered one of the top pitchers in the National League. “Os” would have five seasons where he was voted in the top five in National League Cy Young balloting and it was his arm that won the NLCS MVP in 2005 getting Houston to their lone World Series appearance. Oswalt was a very good starter for an extended period of time, but was it enough for Cooperstown? It probably isn’t though it can not be forgotten that in a six year period he finished in the top five in Cy Young voting for five…
Read more

Baseball
Add new comment
A four time All Star, Tim Hudson spread those accolades over three teams (Oakland, Atlanta & San Francisco).  Hudson would finish in the top ten in Cy Young voting four times, including a runner-up run in 2000.  He would also finish in the top ten bWAR for Pitcher seven times.  The sinkerball specialist would win 223 Games, an excellent number for his era, and most notably, made history by becoming the oldest Pitcher to start a Game 7 in the World Series, a game that his San Francisco Giants won, giving him his lone World Series ring.
Read more

Baseball
Comments (1)
Wine and scotch got better with age, and for years the sporting world thought Jamie Moyer did too. He holds multiple pitching records in regards to the oldest pitcher to do (insert accomplishment here) and is one of the rare players to have competed in four decades.
Read more

Baseball
Add new comment
Johnny Damon came close to getting to the 3,000 Hit mark in his career (2,769) and did have other decent career numbers with 235 Home Runs, 1,139 Runs Batted in and 408 Stolen Bases. Damon was also a very popular figure who won two World Series (one in Boston and one in New York), but a look at his individual campaigns show that of a statistical compiler, as he never had a top ten MVP season, only made two All-Stars, and only was in the top ten in WAR for Position Players once. Throw in his sub .800 career OPS…
Read more

Baseball
Comments (1)
Larry Jackson played for some good teams, but never any great ones (he never played in the post season). As such, Jackson never made the 200 Win club, but his value as an innings eater was essential to the success that many of his teams had.
Read more
Subscribe to this RSS feed

Warning: count(): Parameter must be an array or an object that implements Countable in /home/notinhal/public_html/templates/cosmos/html/com_k2/baseball/category.php on line 270