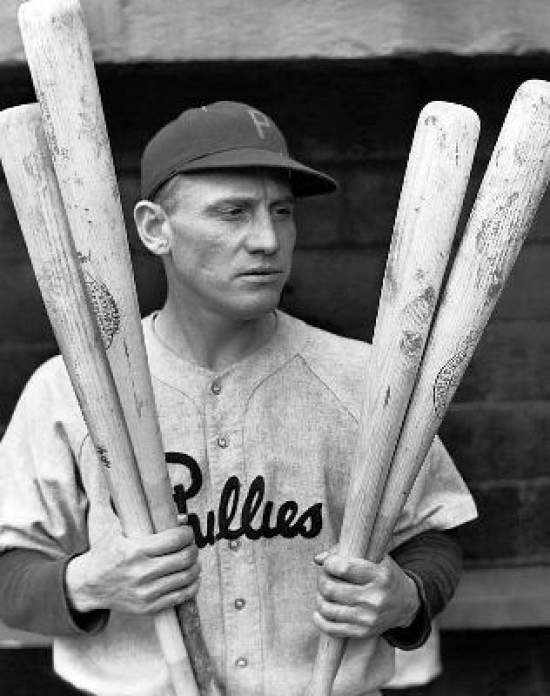 Sometimes it is better to be lucky than good.

Chuck Klein probably should not have debuted with the Philadelphia Phillies, as he was the property of the St. Louis Cardinals.  Klein was turning heads with Fort Wayne of the Central League and was likely to be called up.   The only thing was that the Redbirds also owned the Dayton club in the same league, which was against the rules of MLB and then Commissioner Kennesaw Mountain Landis forced St. Louis to sell the team and its players.  Philadelphia was the highest bidder for Klein.

1929 would be the first full Major League season for Klein and he responded brilliantly by winning the National League Home Run Title with 43 blasts, a career high.  He would again hit 40 Home Runs the next year but with totals of 31, 38 and 28 in the next three seasons he would again win the NL Home Run Title, giving him four in total.

Klein was far from one dimensional at the plate.  From the period of 1929 to 1933, Klein never batted lower than .330 and won the Batting Title in 1933.  That was the same year he would lead the NL in On Base Percentage and Slugging and he recorded four .400 OBP and four 1.000 OPS seasons.  Not surprisingly, there was an MVP in that mix (1932) and he bookended that with runner-up finishes.

While Chuck Klein was a bona fide superstar in Baseball, he did not play with anyone near his caliber.  The Phillies were bad and most of all broke, and they would trade their best player to the Chicago Cubs prior to the 1934 season, though a mid-season injury would render him a fraction of what he was.  He would be traded back to Philadelphia for a second run, released and resigned in a bit-role in the early 40’s.

Klein would enter the Baseball Hall of Fame in 1980 as a Veteran’s Committee Selection.