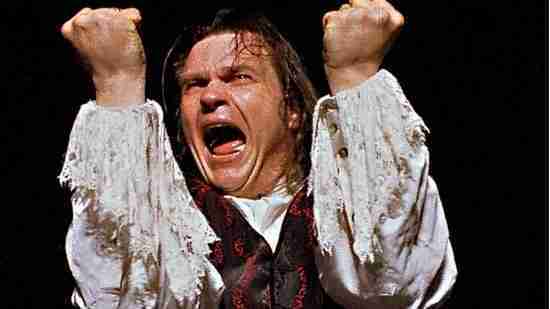 Regardless of your career how fathomable is it to have two great accomplishments sixteen years apart with virtually nothing in between? Beyond Meat Loaf, who did that with his two Bat out of Hell Albums we can’t think of very many.

It can’t be underestimated how popular the first Bat out of Hell album was. Teaming with writer Jim Steinman, Bat out of Hell was a Teen Rock Opera that was the perfect vehicle for the booming voice of Marvin Lee Aday; best known to the world as Meat Loaf. The album combined Rock and Roll with Wagner and with Meat Loaf behind the microphone, he was able to deliver the songs in a way that could appeal to the hardest rocker and the Pavarotti set. It was not until the album’s sequel in 1993, that Meat Loaf teamed with Steinman again, and literally found his voice again. As big as those two albums were, it may be difficult for some to view Meat Loaf as being anything without Steinman, but the Hall does have many a singer who was aided greatly by amazing writing talent.

I would challenge that . elton john and bernie taupin are far...FAR bigger. Elton John just would not have made it without Taupin. John told the audience that without Taupin there probably wouldn't be an Elton John as the public has come to know him.
I am not denying the calboration between Steinman and Meatloaf isn't huge and brilliant , just not the greatest. Also point out that meatloaf has done albums without Steinman (as Elton John has done without Taupin) .
Meatloaf is a no brainer . the amount of parties and pubs I have been to that have Bat Out Hell playing is amazing. Even today going to my nieces 21st, she had Meatloaf playing. the music is timeless. 200,000 every year shows you how great the album is .
Quote
+6 #4 Darryl Tahirali 2013-05-28 23:29
A lot of the listenabilit y of Bat out of Hell comes from Todd Rundgren's production. Too bad he didn't stick around.

As far as overblown epics go, however, I will take "Paradise by the Dashboard Light" over "Bohemian Rhapsody" any day and twice on Sundays.
Quote
+5 #3 plee22 -0001-11-30 00:00
My fav is , " I WOULD DO ANYTHING FOR LOVE !"
Quote
+4 #2 Musicologist999 -0001-11-30 00:00
Yes, Meat Loaf can belt it out like nobody else, and the first two "Bat Out Of Hell" albums were huge, huge sellers. But yeah, Meat is very much tied down to Jim Steinman. Also, I don't think the critics have ever warmed up to Meat Loaf's over-the-top theatrical rock music. It'd be nice to see Meat Loaf get inducted, but don't count on it.
Quote
+6 #1 jimmy26 -0001-11-30 00:00
Okay. look at the lists of the top selling albums either domestic or worldwide! Now take away the obvious non rock artists who are on these lists that aren't already in the hall or soon will be. Who does that leave? Well yes people that would be the one and only Meat Loaf. Bat Out of hell really is that big of an album. It continues to sell at an incredible rate year after year as new generations of kids are introduced to what it means to be young in america and have ants in your pants. now tell me about impact and legacy again. Every song is a classic and the voice behind these mini epics is from a man who would never fit the rock star look. But then he became the biggest one in the world both literally and figuratively for a shot time. and continues to be a legend today. let him in. and put Steinman in as well. Best combo singer/songw riter ever. Bar none.
Quote
Refresh comments list
RSS feed for comments to this post