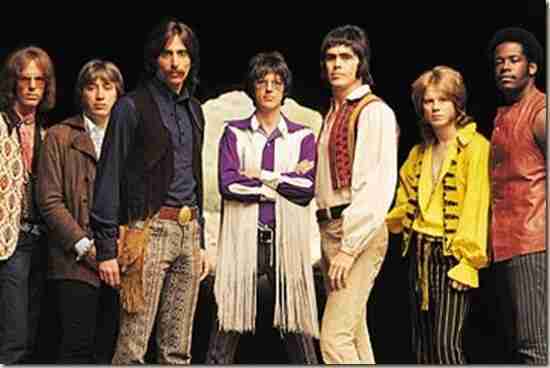 Again we find ourselves with a band that achieved great success on the charts yet were not darlings of the critics. Yet as successful as Three Dog Night were in the early 70’s, they are barely known by today’s generation. Funny, they were not always so anonymous.

When we said they were successful, we certainly meant it. With twenty one top forty hits (eleven of which went top ten) to their credit they were all over the charts. With a three voice attack, along with intricate arrangements their slick production values were tailor made for radio play. Ironically, this could also be their biggest obstacle. They were painted by some as too commercial and thus were devoid of the rebelliousness of the Rock and Roll Spirit. Their success gives them a shot, but it is just a remote one at this point.

Should Three Dog Night be in the Hall of Fame?

Should Three Dog Night be in the Hall of Fame? 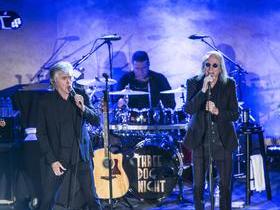 Buy your Tickets to see Three Dog Night at Saban Theatre in Beverly Hills, CA HERE for as little as $95! 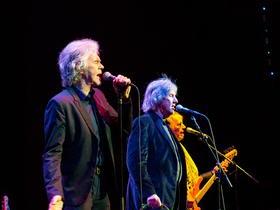 Buy your Tickets to see Three Dog Night at New Barn Theatre in Renfro Valley, KY HERE for as little as $154!

Buy your Tickets to see Three Dog Night at Atlanta Symphony Hall in Atlanta, GA HERE for as little as $81!

+7 #8 Anare 2015-01-25 20:08
TDN should be in the RRHOF. Not writing their own songs is a lame excuse esp since TDN took songs written by others and arranged them for their voices, style, and sound, sometimes changing the lyrics and making the songs completely different. They were too commercial? What? That's a bad thing? Furthermore TDN should be recognized for being on the cutting edge for how they packaged themselves, their look, their album covers, how they promoted their shows being the first to sell out stadiums, got on TV shows, started the Rockin' New Years Eve with Dick Clark. They more than deserve to be nominated. Wouldn't it be sweet if those three lead singers came back together for the RRHOF?
Quote
+7 #7 Ammonraa 2014-10-13 19:15
Regardless whether people now adays remember their name or not they all know ATLEAST 3 songs they dig if not more. Elvis didn't write his own material. Zeppelin did a ton of blues standards. I look at the influence a band has. Three dog night was one of the few bands that had a distinctive sound but wasn't repetative. Commercial or not they were GREAT entertainers and put asses in seats. They sold out shows and venues at that time thought to be impossible to fill. They were good musicians and there are several acts in the hall that aren't even half as talented. Just seems elitist to omit them for something that is obviously not a standard across the board.
Quote
+9 #6 Helen 2014-07-05 23:30
Chuck Negron lead singer is the discernible voice and founding member for American rock legends Three Dog Night. Between 1969 and 1975, the group spawned (21) consecutive Billboard Top 40 hits with (3) reaching the number one spot. The group generated twelve straight gold albums and sold nearly 50 million records by late 1975. Nobody sold more records or concert tickets during this period than Three Dog Night.
The band prevailed by recording cover tunes penned by new and gifted songwriters while executing soulful & hip musical harmonies and delivering dynamic stage performances . Three Dog Night became one of the most commercially successful rock/pop groups of all-time and helped to launch the careers of countless music artists that would eventually become legendary. Some of Three Dog Night’s opening acts were …Rod Stewart, Aerosmith, ELO, Uriah Heep and co-headlinin g with Led Zeppelin!!
What more needs to be said they should be inducted!!
Quote
+7 #5 Carl Hardy 2014-07-02 21:41
Three Dog Night was and still is one of my favorite all time bands. i grew up with their sound. They put a blues sound into rock and roll. Not too many bands can pull that off. I stil listen often to their wonderful mix of blues and rock. They are still traveling around and wooing old timers and many newcomers to their music. You can't have groups like Led Zeppelin in the hall without Three Dog Night. They were fairly well received by Rolling Stone critically so maybe they might have a chance.
Quote
+11 #4 Katherine 2013-07-12 01:49
The whole RRHoF is BS. They threw us a bone this year with inducting Rush (who should have been inducted the same year as George Harrison, iMHO), but basically they suck. Three Dog Night and Grand Funk Railroad make up the '70s memories for me, but neither are in. WTH??? Then when you add up Stevie Ray Vaughn, Yes, Steve Miller, Deep Purple, Paul Revere & the Raiders, etc..... that changes to WTF??? I get it, Mt. Wenner, you don't like them. I'd give that a pass if only ABBA and The Bee Gees and even Lloyd Price (sorry, MHO) had to follow the same protocol.
Quote
+12 #3 George Thomas 2013-03-25 19:16
Three Dog night was an awesome band, only a hermit would have not heard of them in the 70's. They were not songwriters ( neither was Elvis ) but had the best songwriters of the time pen their songs for them. They deserve to be in the Rock and Roll Hall of Fame.Yes, Zeppelin and Pink Floyd still have alot of their stuff playing, but in their heyday, they were not any more popular than Three Dog Night. It is sad with these accomplishme nts, they depend on critics and other people and not the masses who enjoy their music, would you not agree?
Quote
+8 #2 Dr Clayton Forrester -0001-11-30 00:00
Yeah, I'm a bit surprised that they're not in there yet.
Quote
+9 #1 jimmy26 -0001-11-30 00:00
Look at that list of hits! Just think the five the committee has listed does not even include their biggest Joy to the World which was as big a hit as the early 70's saw. If success is part of the criteria then they are easily firballot inductess. They may be lacking in other qualities and yes their legacy has taken a hit as has all early 70's groups outside of the incomparable Zepp. And if influence has anything to do with being played then man they are shoeins. Realisticall y how many other groups will still have theri songs being played albeit not as much as in their heydey in 50 years? Though many of the groups that have gotten in are because of a massive increase of their songs being played over the course of time (see the Ramones or even the Floyd for that matter) and thus a huge recognizabil ity factor having increased. These guys are somewhere in between. yes theri songs are not as popular as they were when they came out but they are still plenty popular enough to be known by all music fans across genres. No they may not have influenced any new movements in rock but having your songs last forever certainly should be a consideratio n.
Quote
Refresh comments list
RSS feed for comments to this post