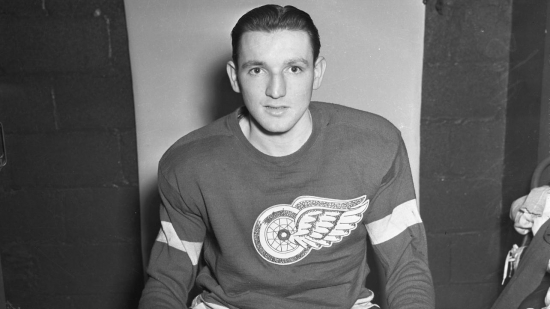 Sid Abel began his NHL career way back in 1938 with the Detroit Red Wings, a team that “Old Bootnose” would become synonymous with.

The Right Wing was a mainstay on the team ad of the 1940-41 Season, and a year later, when he was named a Second Team All-Star, was named the Red Wings' Captain. Abel led Detroit a Stanley Cup win in 1943, but he went into the military during World War II like so many other Canadians.  He returned late in the 1945-46 Season and regained his captaincy.

In 1947, Abel would team up on a line with Ted Lindsay and Gordie Howe, and it quickly became the most dynamic trio in the sport.  Nicknamed the "Production Line," Abel had the horses around him to win the Hart Trophy in 1948-49, where he was also a First Team All-Star and the league-leader in Goals (28) and Power Play Goals (8).

Abel was the elder statesman in Detroit's early success in the 1950s.  Abel was again a First Team All-Star in 1949-50 and was fourth in Hart voting.  The Red Wings won the Stanley Cup in 1950 and in 1952, but that was his last year in Detroit as his contract was sold to Chicago.  He only played 42 more Games, but injuries and age caught up to him, and he was mostly ineffective.