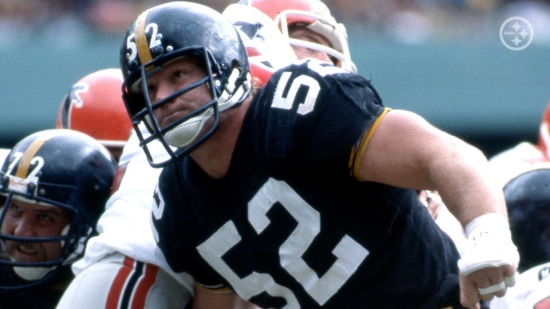 After being drafted in the Fifth Round in 1974, Mike Webster worked on Special Teams, Center and Guard in his first two seasons, contributing to the Steelers in little ways while helping them win their first two Super Bowls.  What followed was one of the greatest runs ever by an NFL Center.

Webster began the 1976 as the Steelers’ starting Center, and he would do so for the next 150 Games.  He became an icon in Pittsburgh for his tenacity and ability to play through injuries, regardless of the severity.  The Steelers were mostly known for their defense, but Webster ran the line that won two more Super Bowls and kept Pittsburgh competitive through the 80s.

“Iron” Mike would win two more Super Bowls, and was a perennial Pro Bowl Selection from 1978 to 1985, with another one in 1987. Five of those Pro Bowl years were also First Team All-Pro season, with four of them being consecutive (1978-81). He would later earn the honor of being named to the 1970s and 1980s All-Decade Team, and he was also chosen for the 75thand 100thAnniversary Team.  Webster played for Pittsburgh until 1988 when he signed with Kansas City for two more years.  The Pro Football Hall of Fame called his name in 1997, and he was posthumously named to the Steelers Hall of Honor 20 years later.

The end for Webster was sadly tragic.  The Center incurred substantial brain damage and was diagnosed with chronic traumatic encephalopathy (CTE), a degenerative brain disease that football players are now all aware of.  He died at the age of 50, following years of pain, dementia and depression.