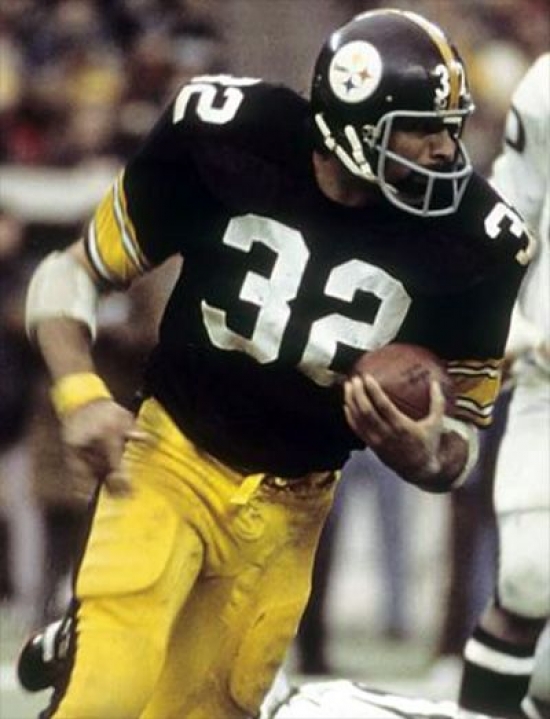 With all due respect to the many great Running Backs that the Pittsburgh Steelers had, they are all in line behind Franco Harris, who is still the team’s all-time leading rusher.

Harris debuted in the professional ranks in 1972 for the Steelers, a team he didn’t have to travel far from as he was a star at Penn State.  The Running Back won the Offensive Rookie of the Year, going to the Pro Bowl and rushing for 1,055 Yards and 10 Touchdowns.  This was the year where Harris was the beneficiary of the "Immaculate Reception," as a still-debated play that saw the Steelers beat the Raiders in the playoffs.  Pittsburgh didn't win it all that year, but they had a Running Back in tow that could help them.

Harris was one of the best Running Backs of the decade, going to Pro Bowl every season from 1972 to 1980.  Harris was a First Team All-Pro in 1977 (1,162 Rushing Yards and 11 TDs), but he arguably was better the season before with a league-leading 14 TDs and 1,128 Rushing Yards.  Harris helped propel the Steelers to four Super Bowl wins, earning MVP honors in the first title.  Over 19 Playoff Games, Harris had 2,060 Yards From Scrimmage with 17 Touchdowns, an incredible number over intense situations.

Harris was with the Steelers until 1983, playing one final year in Seattle before retiring.  Overall, Harris would accumulate 14,234 Yards From Scrimmage with an even 100 Touchdowns.  The Pro Football Hall of Fame came calling in 1990 and was a member of the first Steelers' Hall of Honor in 2017.