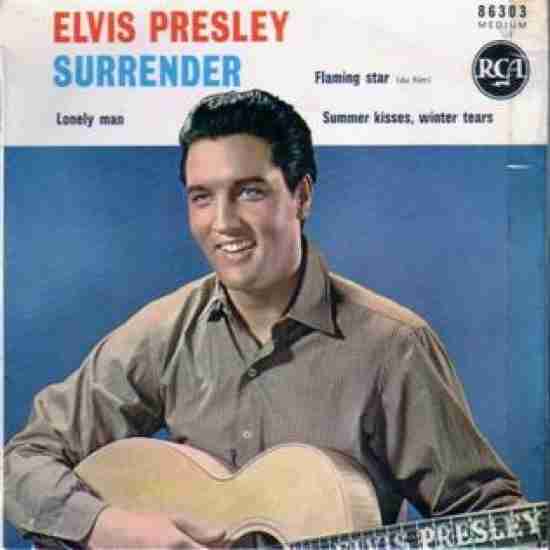 
First a side note, as I am a little sad that I won’t get to talk about Cheap Trick’s “Surrender”, but I digress.[1]

I have already talked about how Elvis Presley was becoming more “adult” and the rock rebellion that symbolized him in 1956 wasn’t really there anymore.  Even though I already wrote that, when I got to “Surrender” and looked at the album cover that accompanied the song, I realized just how much he changed from ’56.

The long sideburns were gone, the pompadour was shorter, the sneer was gone and he was wearing a puke brown shirt that looked like he kept it from his military days. Still, Elvis Presley was a very successful entity in 1961 and would was a fixture on the Hot 100, but a more mature Presley fit with the sensibilities of the era.  Sure, he was less rebellious, but so was the era and he had a broader appeal than he ever had before.

This didn’t mean that Elvis couldn’t still “rock out” as the beginning of “Surrender” does a great job showcasing Presley’s musical chops on a fast tempo.  The song builds up to a sexual crescendo where he basically asks (whomever that woman is) to “surrender” to the desire that they have for one another, which plays to both the “Rock Elvis” fans and the “Ballad Elvis” fans.

Incidentally, in case you thought that we might have been done with European influence, “Surrender” was a loose adaptation of an Italian ballad, and if you weren’t convinced of that, Presley’s final verse of “Be Mine Tonight” where he feels operatic should illustrate that point.

“The King” will still have a very good decade, but we are actually reaching the point where the end of his reign on top is coming very close.

[1] When I get to Cheap Trick, it won’t be for the song you think of.  Actually it won’t be your top three.