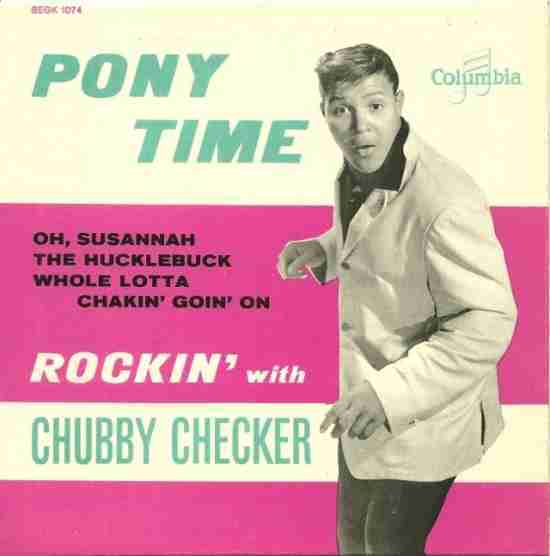 
“The Twist” launched a dance craze where America was dancing and swivelling their hips…whether they should have or not.  When you have a hit of that of that magnitude, surely you need to find a way to replicate that right?  There were many contenders, but since Chubby Checker got everyone twisting, why couldn’t he get them to do the “pony”?[1]

Like “The Twist”, “Pony Time” was a cover of a song done only a year before, this time by Don Covay, though like the original version of “The Twist”, it did not chart well and is only linked to Checker.  As the name suggests, the dancers act as if they are riding a pony, which although sounds a little silly is considerably better than the:

I could probably go on for page after page, and that doesn’t even include my failed dances during my clubbing days.[2]

Checker had another Top 20 hit in between “The Twist” and “Pony Time”, with “The Hucklebuck”, which was another dance song that I have little interest in describing.  We have one more Chubby Checker song (sort of) to talk about, and I think you already know what style it is.

[1] No, “doing the pony” is not something dirty that you would see in the basement of a Mexican bar.  That would be “doing the donkey”.

[2] What are some of those dances you didn’t ask?  On was “The Ginsu”, where I pretend to be chopping vegetables.  Another was “The Confused Blind Guy”, where I grabbed a pool cue and sunglasses and venture on to the dance floor.  My favorite though was “The Russian River Dance” where I cross my arms and flail my legs in my horrific interpretation of the Irish River Dance.  Seriously, I convinced myself that the latter was a tribute to the two greatest drinking cultures.  Luckily I never broke out the “German Mime”.

More in this category: « Calcutta Surrender »