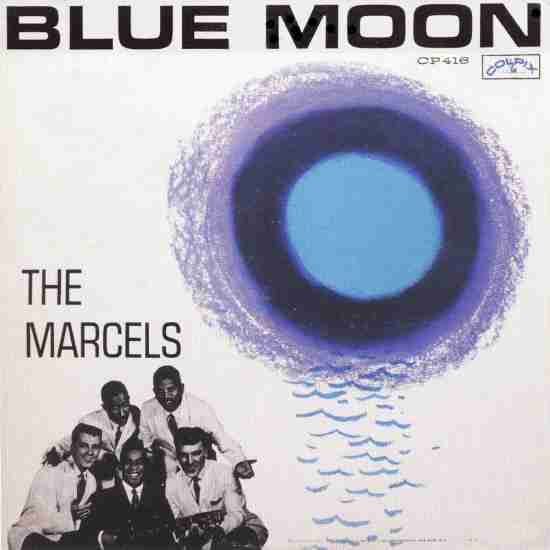 That is how “Blue Moon” started, but you will have to forgive me if there are some spelling mistakes.  Also, I don’t care to mention the rest of the lyrics.

The Marcels put such a definitive stamp on “Blue Moon” that it is almost inconceivable that this was a cover of a 1933 song by the Broadway team of Richard Rodgers and Lorenz Hart and was actually a hit for other artists.  Billy Eckstein went #21 with it in 1949 and Judge Harry Stone’s favorite crooner, Mel Torme went to #20 with it that same year.[1]  Elvis Presley even recorded a version on his debut album, but it was the Marcels, an interracial doo wop group from Pittsburgh that are synonymous with this particular song.

What made the song of course was the introduction with the long series of non-words, which was actually a throw away from another song they used to perform.  For many (myself included) this lengthy gibberish makes the song so memorable, but there have been critics who have called it “novelty doo wop” and have dismissed as fluff, but they can’t call it unsuccessful.

The Marcels would have another top ten hit in 1961, but all people remember about them is this song, which considering it is one of the most memorable doo wop songs of all time isn’t such a bad legacy to have, not to mention a sweet spot in the closing credits of “An American Werewolf in London”[2]

Actually, that last accolade is a bigger deal to me.

[1] Did anyone other than John Larroquette ever work again after Night Court went off the air?

[2] I had such high hopes for “An American Werewolf in Paris”.  What a let down that movie was.  I guess it should have stayed in London.

More in this category: « Surrender Runaway »