My Heart Has a Mind of Its Own 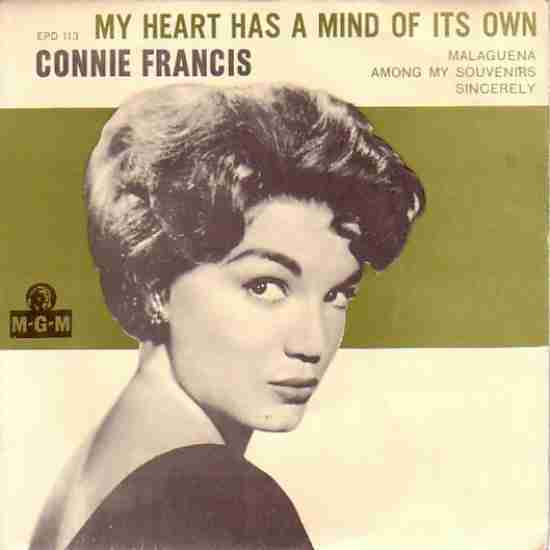 
Connie Francis returns with her second of three number ones, and second of 1960, easily her best year in the music business.

I’ll keep this one brief as “My Heart Has A Mind of its Own” duplicates a lot from her first hit.  Francis sings of love with a tinge of female independence and struck a chord with the female buying record public and though this song did not have the European influence that her first number one did, she would record it in German and have a major hit there with it.

With one more Connie song to go, I will leave how the rest of her career went until then, but the more I look at 1960 Connie Francis, the more I understand her appeal, at least from a male point of view anyway.  Francis while on the outside had that girl next door quality, had something in her eye that made you think that she had a sexuality that she was deliberately hiding and one that she had the internal discipline never reveal it.[1]  She had a traditional European look to her yet wasn’t cookie cutter either.  Connie Francis was a woman while her main rival Brenda Lee was a girl.

When I receive angry emails from Connie Francis fans or those on her page on Notinhalloffame.com complaining about her low rank on the rock list, I understand it a little more, especially if it is from a male who came of age during that time.   Chances are that would have been “my girl” too.

Now how come they figured out how to leave a comment, but not register and vote, which would increase her rank?

[1] What probably helped is that half of the publicity photos she was looking off camera, almost daring you to try to find a way for her to make eye contact with you.
Tagged under
Tweet

More in this category: « The Twist Mr. Custer »