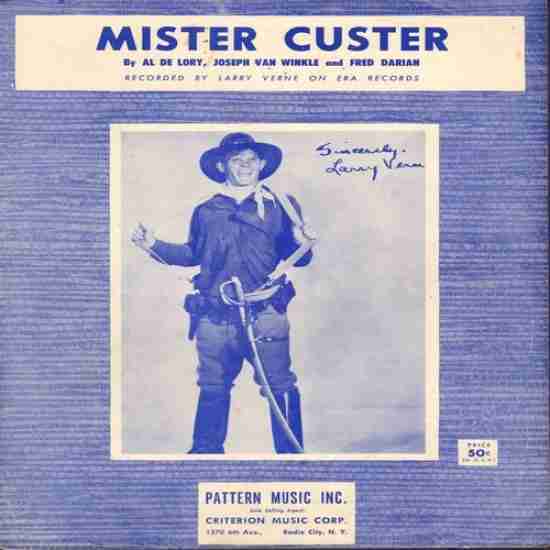 
I barely had any recall of Larry Verne and “Mr. Custer” before research began on this anthology.  I wish I could now go back to those simpler times and forget this horrific song completely.

We have another novelty song that reached the top of the Hot 100 in 1960, but unlike Brian Hyland ode to small swimwear, there aren’t a lot of people who remember Larry Verne and his plea to General George Custer not to fight the Battle of Little Big Horn.

For those unaware, this was the 1876 battle in which Custer’s force of 700 was soundly defeated by a combination of Native Americans (The Lakota, The Northern Cheyenne and Arapaho) led by Crazy Horse.  Custer was killed in the battle.  Like the Alamo, even though the U.S. forces lost, it became a major part of American folklore and at a time when Westerns ruled cinema and television songs about the frontier days were easier to sell…even when the Indians won.

Verne didn’t sing from the point of view from the natives who defended their territory, nor from the perspective of the American soldiers in battle.  No, he went with the version where he was a cowardly soldier who wanted nothing to do with the “redskins” and the “injuns” and essentially referred to them as wild savages…not exactly words appropriate in our modern lexicon; unless you are the owner of a professional football team in Washington D.C.

I am not exaggerating when I use the word cowardly either.  Verne adopts a higher pitch and almost dim-witted country tone when singing and watching back performances he wears an oversized hat making buffoonish faces at the camera while the background of native chants plays along.  Honestly, I don’t know who this song is more offensive to, the Native Americans who endured racial slurs, the American soldier who had to listen to a portrayal of cowardice for laughs or popular music in general for being associated with it all.

This was Verne’s only real hit and he was never heard from again, almost as if he really did die in Montana.

More in this category: « My Heart Has a Mind of Its Own Save the Last Dance for Me »