Don't Break the Heart that Loves You 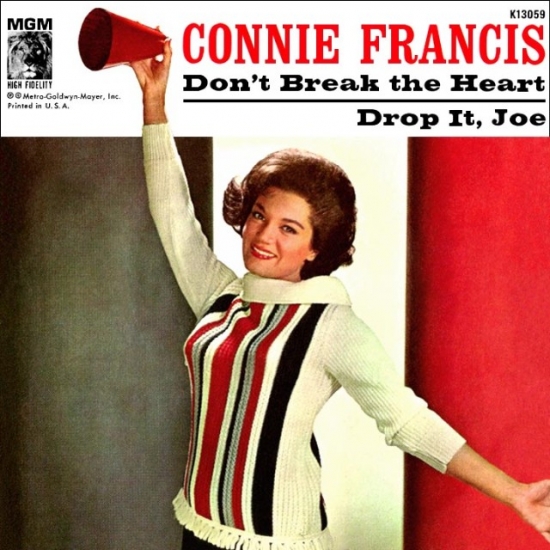 Connie Francis had a great run in between her last number one and  “Don’t Break the Heart That Loves You”, which would be her third and final number one song.  In that timeframe, Francis would make her onscreen film debut (though she provided singing voices in three other films, most notably for Jayne Mansfield) in Where the Boys Are, a female coming of age film and in terms of its sexual content, a little ahead of its time.  Francis provided the eponymous song for the film (it went to #4), which for many is the song that they know her for best.

With Francis’ final number one, she sings about being treated poorly by the man she loves and of course delivered it in great harmonious fashion.  It should not also be a surprise that she also recorded it in other languages, that being Italian, German, Spanish and even Japanese.

Francis would have two more Top Ten hits in 1962, but with every year that followed would see her have less and less chart success and by 1970 she would never return to it all.  Still, Francis had been so successful that she was still a strong concert draw, though she would suffer tragedy after tragedy that nearly took it all away.

In 1974, an assailant who would never be caught raped her in a hotel room.  Three years after that, nasal surgery took away her voice and it would be years before she would be able to sing again.  The 1980’s would not be much better as her brother would be killed in a mafia hit and severe depression would almost cause her to attempt suicide.   Francis would however persevere and while she would never be a serious threat to be a chart topper again, the fact that she came back to perform at all should be celebrated.

Apparently a biopic was in the works for her life story, which was backed and to be portrayed by Gloria Estefan (she will come up often later in this book) and while I can’t say that I can really see Estefan playing it, this was a film that I hope gets made at one point and educates a new generation on who she was.  All I ask who ever is cast as her makes more sense than Kevin Spacey did as Bobby Darin.[1]