Come Softly To Me 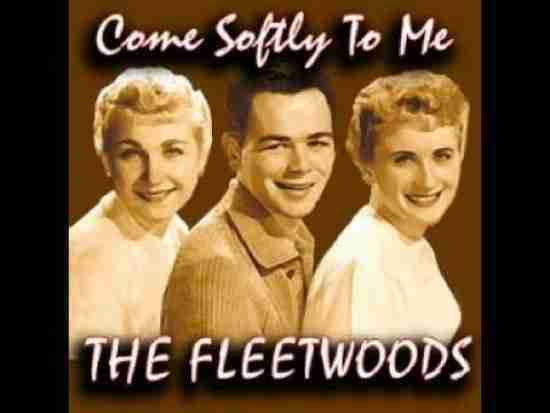 From the capital city of Washington, we have the Fleetwoods who continue the 1950’s tradition of successful and melodic Doo Wop groups that reached the top of the charts.

While the Fleetwoods did go to the top of the charts twice, and they are both songs that I know well, for whatever reason until I started writing this anthology, I couldn’t tell you that those tunes were sung by the Fleetwoods, and I tried to think of why that was.

Maybe because when I hear the word Fleetwood and music I automatically think of Fleetwood Mac?  Is it because they really didn’t have much of a stage presence and looked about more vanilla than actual vanilla?  Is it because I really do drink too much Jack Daniels and my memory isn’t quite what it used to be?  Either way, the Fleetwoods had a solid grasp on ballad driven Doo Wop, and for a brief time were amongst the best at it.

The group began as just a duet of high school classmates, Gretchen Christopher and Barbara Ellis who would later add fellow classmate, Gary Troxell and his trumpet, though that brass instrument would be short lived after they heard his singing skills from a piece he wrote.  It was a great move and the trio would score gigs in Olympia gaining the attention of a man named Bob Reisdorf who ran a small Seattle based label named Dolphin Records.

With a song that they wrote, “Come Softly To Me”, the Fleetwoods had a hit right out of the gate.  With the exception of the backing music added, the biggest change from the original was slightly altering the original name as it was originally titled “Come Softly”.[1]  Reisdorf changed the title fearing that the song’s title may be a little to sexually suggestive, though by looking at the milquetoast Fleetwoods they probably could have gotten away with it.

The soft-spoken song was sweet and simple and one of those songs that even those who were into harder styles of Rock or the Blues wouldn’t necessarily turn off when it played on the radio, as it wasn’t in your face with schmaltz, but it wasn’t exactly elevator music either.  The Fleetwoods were a group that couldn’t exist much longer than the late 50’s and early 60’s, but in this era of number one songs have a lot of groups like them that could fly under the radar yet somehow be on it at the same time.

[1] I admit it…I had a Beavis and Butthead moment when I learned that.
Tagged under
Tweet

More in this category: « Venus The Happy Organ »