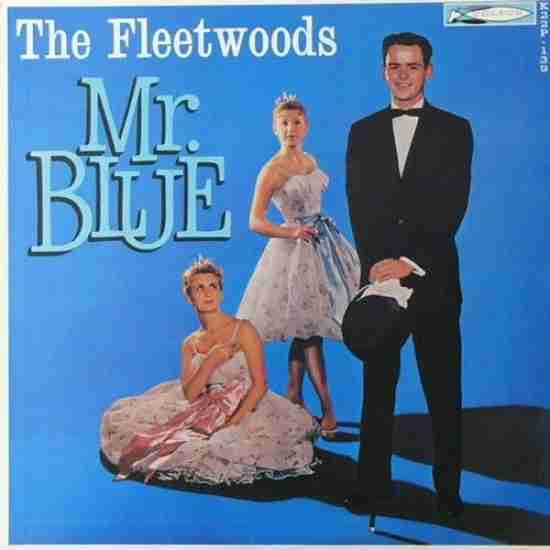 
The second and last number one by the Fleetwoods followed their first number one in by being soft and sweet…actually they may have even those two adjectives to a new level.

Personally, I have always hated the term “Soft Rock”, as the idea that a rock can be soft is contradictory.  I am quibbling with semantics here, I know, but the English language is made for such things, and since that is a musical genre that exists, then celebrating the Fleetwoods as their flag bearer in 1959.

Unlike “Come Softly to Me”, “Mr. Blue” is the tale of lost love and it is a song that fits Gary Troxel’s soft and almost weepy voice perfectly, and that is exactly what is the star of the song.  With a minimalist arrangement, it is only Troxel’s singing voice you hear in the first thirty seconds of the song, leading up to the melancholy chorus, and would be another hit for the group and the small Dolphin Record label that would soon change its name to Dolton Records.

The Fleetwoods would struggle to keep up their momentum as Trokel would have to honor his military commitment, and he was briefly replaced by Vic Dana, who would go on to have a decent solo career of his own highlighted by a number 10 hit, “Red Roses for a Blue Lady” in 1965.[1]

The group would fade away and disband officially a few years later and would occasionally reunite for the oldies tours or one off performances.  Historically speaking, they would also become the first mixed gender group to top the charts twice in the Rock Era and deserves a little more notoriety than they have received previously.

Oh, and for those wondering, yes this anthology will talk about Fleetwood Mac.[2]


[1] Listen to this song again, or anything by the Fleetwoods.  Can you picture Troxel really in the army?  Radar O’Reilly would think this guy is a wimp.
[2] I remember Fleetwood Mac more than the Fleetwoods too.
Last modified on Sunday, 18 December 2016 21:30
Tagged under
Tweet

0 #1 Henry @WWE 2K18 2017-01-10 08:32
Thanks a lot for sharing this great article, I really appreciate the hard work you have put in. I am a regular follower of your site, and it seems its authority has increased a lot in last few months. I will recommend your site to my friends for sure. All the leading Sports video games have made considerable development in their graphics to provide a realistic approach. WWE 2K18 should come with better graphics.
Quote
Refresh comments list
RSS feed for comments to this post