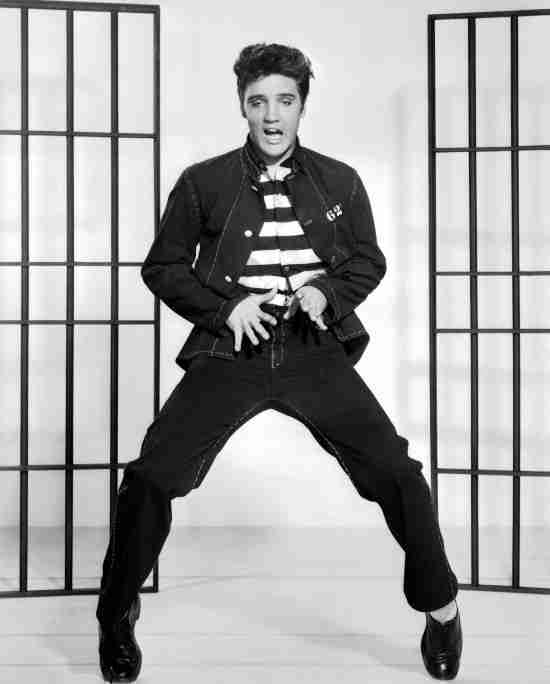 
In my Fictitious Rock and Roll Hall of Fame, I rag a LOT on Elvis Presley and his movie career. I have already here too, and will again, but here we have a case where even though there is a movie in question that isn’t that special, it gave us what many consider to be Elvis’ greatest Rock and Roll song.

The song and movie in question is Jailhouse Rock, and while I will stand by stating that the film itself was not a gem (none of Presley’s films were), it has a special place mainly because of the song and the number he did in it, that played to his strengths. That two and half minute segment, is what most people remember from the flick and what in itself would work in the future as the quintessential Elvis Presley music video. I am not saying that Presley didn’t have moments in future films that were worth celebrating; he did, but with every passing year in the films, finding those cinematic nuggets were harder to find, and almost by default, Jailhouse Rock (the movie) became elevated based on the dreck he churned out in the mid 60’s.

The song, which was written by Jerry Lieber and Mike Stoller, was almost genius in its simplicity. The chords were basic, but powerful, as was Presley’s voice, which was half anguish and half reverence, but was straight up Rock and Roll, though perhaps the word straight may not be accurate when listening to all of the lyrics.

In past interviews, Lieber claimed he was going for a silly lyric, and you kind of have to take it that way, because if you take that lyrically, than Elvis is going for some serious homoerotic behavior and hoping for some jailhouse romance, or at the very least reporting on what he was witnessing. Again, because Presley used every ounce of his Rock and Roll flair, there wasn’t anybody questioning the King or even finding the lyrics suggestive, an ironic thing because the not so suggestive lyrics of the previous song, “Wake Up Little Susie”, but at the same this was the decade where Liberace became a matinee idol and the general public were completely oblivious to his sexuality.

Again, Elvis would have a song that went number one on the Mainstream, Country and R&B Charts, and was the undisputed master of the new Rock and Roll world…despite what may have happened to jailbird number three behind closed bars.

More in this category: « Honeycomb You Send Me »