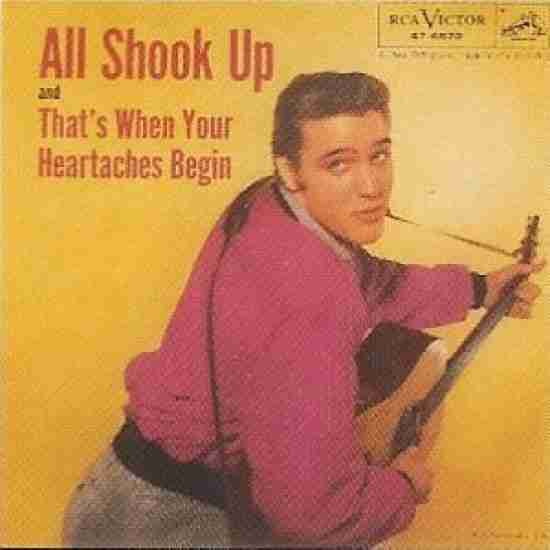 
If you have no interest in Elvis Presley, I really don’t what to tell you other than to skip ahead a lot in this anthology because there is a lot more of him to come. In this series, I have spoken about a lot of great artists who didn’t get to number one, but Elvis Presley is certainly not one of them and when they put out a large compilation simply titled “Elv1s: 30 #1 Hits”, it wasn’t because he was number one in everyone’s heart.[1] I’ll also warn you now that if you don’t want to read more about John, Paul, George and Ringo, skip to mid-1970.

As a little kid growing up in the late 1970’s, along with the Beatles, Elvis was the first person I understood that had a larger place in music history, though I didn’t understand why at the time. Actually, I would say my musical exposure was somewhat stunted as I didn’t find music to be a real escape for me until my mid teens, but indulge another tangent as I take a trip in my dad’s ’77 Grand Prix.

I remember two things specifically from that car; one that it seemed to be the size of a small apartment. The second was that my parents would rotate the same ten 8-Tracks over and over for the ten year duration that they owned it. In fact, I still remember the exact eight:

Not exactly a bevy of musical gold is it?

To this day, I can recite on command every Johnny Horton and Freddy Fender hit, the same as I could at seven years old, and no, that did not make the coolest kid in primary school.

Right now (and my older brother would probably tell you the same thing) that every single one of those 8-tracks (except for James Last, which was a million styles of horrific) holds a lot of great memories for me because I always think of my dad, who I came to realize that in his own way was the coolest man I know. I have to throw the caveat that I didn’t get my love of pop culture from him as music essentially died for him beyond those eight 8-Tracks and occasionally belting out the “Why Why Why” part Del Shannon’s “Runaway”, but through unspoken osmosis, he taught me that of all of the musicians he liked, Elvis Presley was the special one.

It was not just my dad and his high school classmates who thought so, as most of those who were into Rock and Roll at the thought Elvis was the top star, and anyone who hated that style of music couldn’t avoid him. In 1957, Elvis was not just an American phenomenon; he was certifiably a worldwide icon. He had completed his first sold-out concerts outside of the U.S. (in Canada) and “All Shook Up” would become his first number one in the United Kingdom.[4] This was a worldwide superstar and he wasn’t going anywhere but immortality, regardless of what the establishment wanted.

Going back to the song in question, the songwriter was Otis Blackwell, who we I discussed in a previous chapter. While that fact is undeniable, the origin of the song is a little bit blurry. In a 1957 interview, Elvis said that he had woke up from a dream and phoned a friend and said that he was “All Shook Up” and that friend would have a new song written based on it the next day.

Yeah, I don’t buy that one either.

Blackwell suggested that the song was inspired when one of the owners of his publishing company (Shalimar Music) dared him to duplicate a follow-up to Don’t Be Cruel while he was shaking a bottle of Pepsi. “All Shook Up” was thus inspired and he completed the song in two days.

That one seems more likely.

Whether or not a carbonated soft drink or a Presley dream inspired this song, we know for certain that Blackwell wrote another hit and Elvis again had another bullet in his catalogue of music.   This was the dominant song in the middle of 1957 and there was little reason to suspect that anything would change soon regarding Presley’s hit making machine.

We have a lot more trips to Graceland coming!

[1] Not every song went to the top of the Top 100/Hot 100, but did go number #1 on some chart.
[2] Thank God my dad didn’t own part 1 as well as part 2 was horrid. James Last, by the way, was a German big band leader, who was in his late 40’s at the time had his big band cover the genre of disco. Yes, it is as cool as it sounds.
[3] I’m not making that up. I think it was called “Free Spirit ‘77” and it was mostly elevator covers of past hits. The only original I remember for sure was Ronnie Milsap’s “Daydreams About Night Things”, a number one Country hit from 1975.
[4] This would be his fourth number one in Canada.
Tagged under
Tweet

More in this category: « Butterfly Love Letters in the Sand »