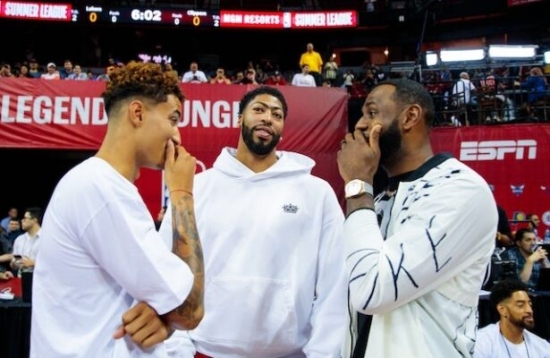 When basketball fans think of elite franchises, the Los Angeles Lakers come to mind instantly. The organization is the proud holder of 33 major Division titles, 19 Conference titles, and an impressive 17 Championships since the team was founded way back in 1947.

Nowadays the Lakers are still top performers in the Western Conference, largely thanks to a few especially talented ball players who will, based on their incredible skills and numerous awards, most likely become future Hall of Famers.

The Naismith Memorial Hall of Fame requires all potential inductees to be fully retired for at least four seasons before they are eligible to be honored. And, of course, none of these three players have yet to leave the game. That said, there is a very strong possibility that they will one day appear inside the Hall’s prestigious doors.

If he were to retire today, there is no doubt that Lebron James would be on a fast track to appearing in the Naismith. Arguably the league's most elite and best-performing athlete, the shooting guard is frequently compared to Michael Jordan in talks concerning the best basketball player of all time.

Number 23's long list of accolades only touches the surface of what this player is capable of. The 6-foot-9 powerhouse holds dozens of different records across the sport's spectrum, ranging from points, to assists, rebounds and more.

It's clear that James is the Lakers' dominating force, leading them to secure the top title as league champions in last year's NBA Finals. This season, the Lakers have been Lebron-less since the athlete's ankle injury on March 20th in a game against the Atlanta Hawks. Although he just recently came back to appear in a match against the Toronto Raptors, James was ultimately forced to sit out for the last few minutes due to pain.

However, despite his absence and unknown return, carefully researched NBA picks still place the Lakers as the victors of another Championship in 2021. This is largely because they still have a great core in other players on the team. One of these, Anthony Davis, happens to be our next future Laker's Hall of Famer.

Ironically enough, Anthony Davis has also sustained several different injuries this season with the Lakers. The number 3 power forward is arguably the team’s biggest asset after Lebron, making up a part of this elite core team that has led the organization to be one of the league’s best.

Like Lebron, Davis has racked up his fair share of accomplishments since his professional career started back in 2012. The player has been named an NBA All-Star a grand total of eight times, listed on four All-NBA First Teams as well as four NBA All-Defensive Teams, and was one of the biggest reasons why the Lakers finished their 2020 season as basketball champs. We have every reason to believe that Davis will be immediately eligible for the Hall of Fame the moment he chooses to retire.

The defensive man recently returned to the court after a calf strain, the longest absence in his NBA career, and scored four points in a game against the Dallas Mavericks. After missing thirty games it is understandable that Davis didn’t have the best performance, but now that he is back in action, fans are excited to see what is in store for the rest of the Lakers season.

Just last year, Davis had high odds, 91.4% in fact, of making it into the Hall of Fame. If he can add another ring to his impressive list of awards, that number may just go up, inching closer to Lebron’s 100%.

Many basketball fans would venture to say that Lebron is the ‘best basketball player on the planet’, but a few of his teammates are often not given the attention they deserve for their natural ability to play the game. One of these fellow athletes is undoubtedly Kyle Kuzman. Having played for the Lakers since 2017, the power forward has proved to be a valuable member in Los Angeles, averaging around 12 points per game.

As he continues to step up to the plate with Lebron gone, there are more chances for him to shine brighter than ever and further display his talent for the game. Although the 25-year old’s career only began a few years ago, he is setting himself up well to one day be honored in the Hall of Fame, where he will likely find himself next to former teammate Kobe Bryant.