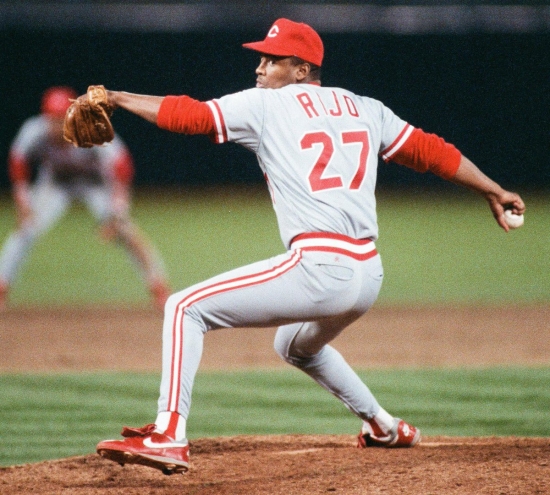 There was a lot of hype for years around Dominican Pitcher Jose Rijo, so much so that the New York Yankees (likely due to the owner, George Steinbrenner) rushed him into the majors at age 18.  Rijo did not do well as a rookie, but what 18-year-old in the Majors does?

Rijo was traded after one year to Oakland, where he showed flashes of his flame-throwing ability, but he was deemed expendable by the A's, who traded him to Cincinnati after three years.  It was as a Red where Rijo put it all together and was the ace of the Cincinnati staff for a time.

From 1988 to 1993 (his first six years as a Red), Rijo kept his ERA under three, while winning the Strikeouts Title in the last year of that run.  Rijo also led the NL in WHIP in 1991, but the year before, he was the World Series MVP in Cincinnati's improbable sweep of Oakland.  Rijo went 2-0 with a 0.59 ERA in that series, and though he never returned to the post-season, it was a phenomenal performance that many Hall of Fame Pitchers never had the chance to equal.

Arm problems forced Rijo to retire after the 1995 Season, but he did try a comeback in 2001, which lasted two seasons.  Rijo retired with a record of 116-91, 1,606 Strikeouts, and a “what might have been” had his arm stayed healthy in the first half of his 30s.

Should Jose Rijo be in the Baseball Hall of Fame?